‘There is no Longer Any Distinction Between Physical and Virtual Courts; Get Used to It': Justice AM Khanwilkar 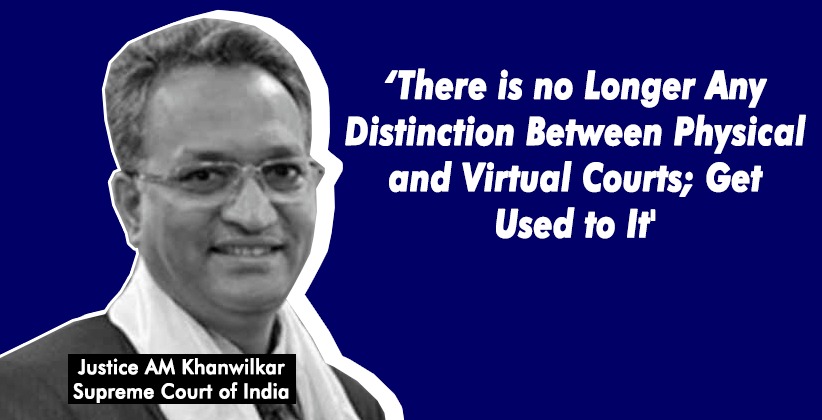 Legal Insiders Nov 05, 2020 Atharwa Gauraha ( Editor: Ekta Joshi ) 95 Shares
95 Shares
"There is no longer any distinction between physical and virtual hearings; get used to this," Justice AM Khanwilkar said while adjourning the appeal against the order of the Bombay High Court upholding the conviction of gangster Arun Gawli in the murder of Shiv Sena corporator Kamlakar Jamsednakar and the life sentence granted to him by the Special MCOCA Court.

The statement was made by the judge in reaction to a request by Advocate Brij Kumar Mishra who, because of the presence of several shapeless files, requested the matter to be taken up before a physical court.  Justice Khanwilkar replied to Mishra by saying that the physical and virtual hearings were no longer different, and it was time to get used to the virtual hearings.

Since the second week of March 2020, with the onset of the COVID-19 pandemic, the Supreme Court has been operating via video conferencing. While the Supreme Court's judges' committee decided in August to revive  physical hearing on an experimental basis in some courtrooms, the change did not take off as very few advocates gave their consent on it. As of September 1, the Court had classified 1000 cases for hearing in physical court. Yet only a handful of supporters agreed to a physical hearing. Recently, after hearing it entirely via video conference, the High Court of Karnataka decided on the Franklin Templeton batch case. The High Court noted that the case showed that even complex matters could be heard and resolved in virtual courts without exceedingly voluminous documents. Gawli's matter will now be listed after the Diwali vacations. He was convicted under Section 302 of the Indian Penal Code and various sections of the Maharashtra Control of Organized Crime Act, 1999 and sentenced to life. The 60-year-old Gawli, currently lodged at Taloja Central Jail, was convicted by a Special Court under the MCOC Act for the murder of Shiv Sena corporator KamlakarJamsandekar in 2012. Gawli was arrested in relation to the case in 2008 and has since been in prison.