Home Legal Insiders "I Do Not Ask for Mercy, I Do Not Appeal to Magnanimity, I am Here to Cheerfully Submit to Any Penalty": Prashant Bhushan quotes Mahatma Gandhi before the SC
Legal Insiders 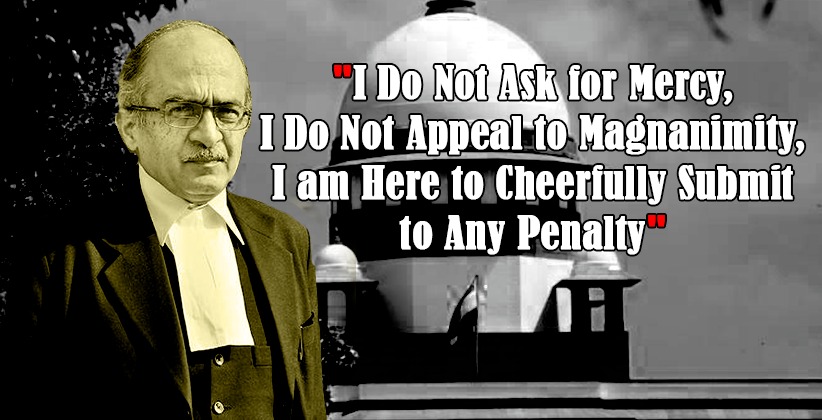 Prashant Bhushan made a statement before the court after being held guilty for the contempt of the court and expressed his dismay about the decision taken by the judges.

In his statements before a bench comprising Justice Arun Mishra, Justice B.R. Gavai and Justice Krishna Murari, he said, “I have gone through the judgment of the Hon’ble Court; I am pained that I have been held guilty of committing contempt of the court whose majesty I have tried to uphold. - not as a courtier or a cheerleader but as a humble guard- for over three decades with some personal and professional cost. I am pained not because I may be punished, but because I have been grossly misunderstood.”

“I am shocked that the court held me guilty for a malicious, scurrilous, calculated attack on the institution of administration of justice. I am dismayed that the court have arrived at the conclusion without providing any evidence of my motive to launch such an attack. I must confess that I am disappointed that the court did not find it necessary to serve me with a copy of the complaint on the basis of which the Suo moto noticed was issued, nor found it necessary to respond to the specific averment made by me in my reply affidavit or the many submissions of my council.”

“I find it hard to believe that the court finds my tweet “has the effect of destabilizing the very foundation of this important pillar of the Indian democracy.” I can only reiterate that these two tweets represented my Bonafide benefits, the expression of which must be permissible in any democracy. Indeed, public scrutiny is desirable for the healthy functioning of the judiciary itself. I believe that the criticism of any institution is necessary in a democracy, to safeguard the constitutional order.  we are living through that moment in our history where higher principle must turn routine obligation when saving constitutional order must come before public and professional niceties, when consideration of the present must not come in the way of discharging our responsibility toward the future. Failing to speak up would have been a dereliction of duty, especially for an officer of the court like myself.”

“My tweets were nothing but a small attempt to discharge what I considered to be my highest duty at this juncture in the history of our republic. I did not tweet in the fit of an absent-mindedness. It would be insincere and contemptuous on my part to offer an apology for the tweets that expressed what was and continues to be my Bonafide belief. Therefore, I can humbly paraphrase what the Father of Nation Mahatma Gandhi had said in his trial: I do not ask for mercy. I do not appeal for the magnanimity. I am here, therefore, to cheerfully submit to any penalty that can lawfully be inflicted upon me for what the court determined to be an offense, and what appears to me to be the highest duty of a citizen.”

Over 2000 lawyers including many senior lawyers have dismayed the order of the Supreme Court and issued a public statement and held their demonstration expressing support and solidarity to Prashant Bhushan.

Many boards and committees like Bar Council of India, Commonwealth Human Rights Initiative, Campaign for Judicial Accountability and Reforms have also criticized the supreme court verdict against Bhushan.

Background of the Case-

A few days ago, Senior Lawyer Prashant Bhushan made two tweets alleging Supreme Court Judges. One tweet was in reference to CJI Bobde in which there was a picture of him and he was seated on Harley Davidson bike, alleging that CJI is enjoying expensive bike rides while keeping the Supreme Court under lockdown.

The second tweet alleged that the Supreme Court has contributed to the destruction of democracy in the last six years, and the last 4 CJI played a particular part in that.

On 14 August, Supreme Court held Prashant Bhushan guilty for Contempt of Court for tweeting against Judiciary. The court held that the tweets were based on distorted facts and have the effect of undermining the authority and dignity of the court.

A bench of justice Arun Mishra, Justice B.R.Gavai and Justice Krishna Murary observed in the judgment, “the tweet has the effect of destabilizing the very foundation of this important pillar of the Indian Democracy...... there is no manner in doubt, that the tweets tend to shake the public confidence in the institution of Judiciary.

The supreme court will hear Mr. Prashant Bhushan's plea for deferment of the hearing of the sentencing as he shall file a review petition against the SC judgment.