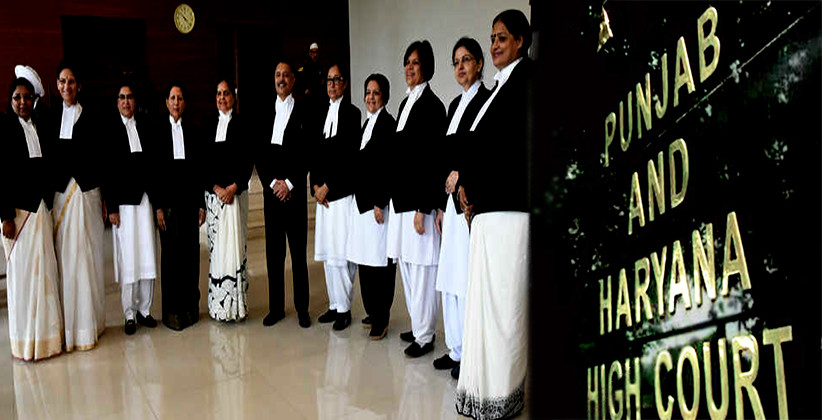 Legal Insiders Dec 02, 2019 Lawstreet News Network 32 Shares
32 Shares
The Punjab & Haryana High Court, for the first time in history since it was established about a hundred years ago, got an all-women’s bench. This historical development took place when the Chief Justice of the High Court administered oath to six officers of the judiciary on November 29, 2019, all of them women, thereby raising the total number of women judges to 10.

The all-women Bench of the High Court comprises of Justice Daya Chaudhary, senior-most woman Judge of the court, Justice Meenakshi Mehta, who took an oath as the additional Judge of the Court on the same morning along with Justice Ashok Kumar Verma, Justice Karamjit Singh, Justice Sant Parkash Phutela, Justice Archana Puri and Justice Vivek Puri. Another peculiar thing to note about this oath administering ceremony was that, for the first time in history, a couple took oath as Justices of the High Court together. Justice Archana Puri and Justice Vivek Puri were the lucky married couple. Reportedly, this was the second time ever, in the history of India, that a couple was sworn-in as Judges in the same ceremony. Another couple was administered oath together about 10 years ago in the High Court of Delhi.

The ceremony was simple and was attended by sitting as well as retired judges of the court while some advocates, bureaucrats and relatives of the newly-appointed judges were present when they swore to “bear true faith and allegiance to the Constitution of India as by law established”. The total number of judges has now gone up to 56 while the sanctioned strength comprises of 85. An increase in the number is a welcomed step as the High Court is tackling with a whopping pendency of more than 5 lakh cases with more than 3 lakh cases pending for over a year. Out of these, around 3000 cases have been pending for 20 years, and more than 22,000 of the total number of cases have been filed by women.

Judiciary Nov 30, 2020 Dev Kumar Patel ( Editor: Ekta Joshi ) 5 Shares
5 Shares
While dismissing a writ petition for transfer of investigation in a case registered at Police Station in Chandigarh, Justice Sant Parkash observed that if a person appears in the friend list of a Facebook page of any public servant, it cannot be assumed that an official shall favor such a person in an illegal manner and maneuver investigation of a crime.Furthermore, Justice Sant Parkash said that it is indeed intriguing as to how the petitioner gained access to the Facebook account of the...
Read full post