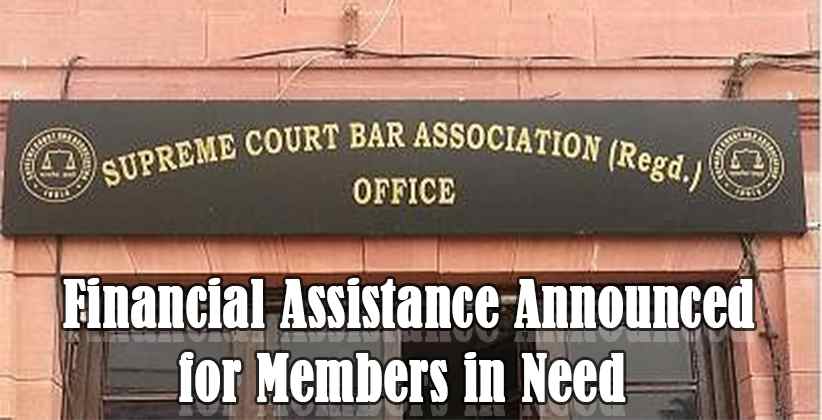 Legal Insiders May 26, 2020 ParthThummar ( Editor: Ekta Joshi ) 158 Shares
158 Shares
The SCBA has announced a financial assistance scheme for its members who need monetary assistance on account of the lockdown due to the COVID-19 pandemic. Under the scheme, a one-time ex-gratia grant of aid will be provided to needy lawyers.

The Executive Committee of the Supreme Court Bar Association (SCBA) after taking into consideration the serious distress caused to its members by the catastrophic conditions being faced by them in these days of the pandemic, has announced the all-new “COVID-19 Financial Assistance and Grant Scheme”.  Under this Scheme the benefit of the grant will be extended to all members whose names are included in the list of voters of the SCBA during the years 2015 -2019 and that those members require financial assistance facing serious hardship due to the lockdown in these days of the pandemic.

The benefits under the Scheme will be extended to those members who have an income of less than Rs. 8,00,00.00 (Rupees Eight Lakhs) per annum and as proof of the same, applicant wishing to avail the benefit of the scheme is required to annex IT returns of preceding years with the application.   It is also mentioned that the identity of the Advocate seeking benefit under the Scheme will be kept confidential as far as possible. It is also made clear that for the scheme, the financial resources of the SCBA are not being used and the same is offered from the generous and voluntary donations made by members of the SCBA for this purpose. Under the scheme, one-time financial assistance as an ex gratia benefit limited to a sum of Rs. 20,000/- is offered.    [READ ORDER]