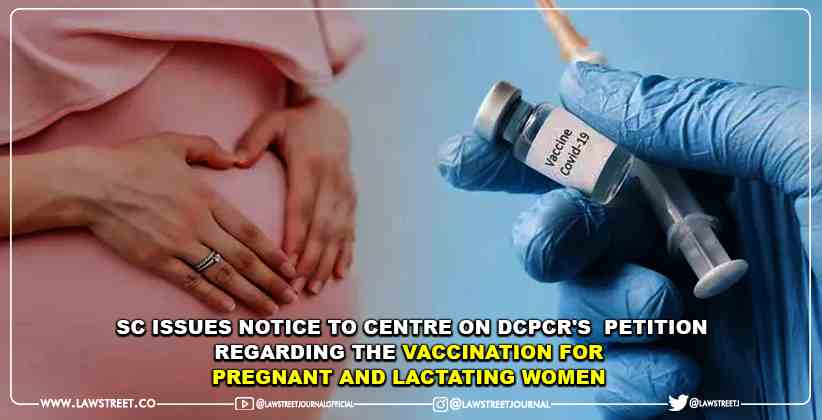 On 20th September 2021 the Supreme Court issued a notice to the Central Government in response to the petition filed by the Delhi Commission for Protection of Child Rights (DCPCR) regarding the vaccination for pregnant and lactating women.

The counsel representing the petitioner Advocate Vrinda Grover held that the Union has issued guidelines about the vaccination of pregnant and lactating women, however, certain concerns have not been addressed and therefore, they have filed the petition.

The petitioner further submitted that since the world is dealing with a new kind of virus, of which we know very little, it is essential that certain tests should be done so that it can be ensured that the effects on the lactating and pregnant women are not harmful. Grover further added that there is a need to create a registry for ensuring continuous monitoring.

The petition contended that Article 21 of the Constitution guarantees the right to health under the umbrella provision of Right to life and therefore, the State is obligated to protect the health and life of women and children which includes pregnant women and lactating women as their health is directly associated to the well-being of their children.

Furthermore, it was held in the petition that the vaccine boosts immunity and prevents the spread of disease and anyone should not be deprived of the vaccine on any arbitrary ground.

NOTICE ISSUED BY THE JUDGES

The bench comprising of Justices DY Chandrachud and BV Nagarathna issued a notice to the Central Government on the petition filed by the  Delhi Commission for Protection of Child Rights (DCPCR) and directed for the assistance of the Solicitor General of India for more information and details regarding the operational guidelines. The petition will be listed after 2 weeks.

The petition was filed for certain directions to develop education material and Standard Operating Protocols for educating women about the effects of vaccination, especially on those women who are pregnant or lactating mothers so that they are aware of such details.

Furthermore, the petition stated that there needs to be the creation of a registry in order to maintain a record and monitor if the vaccine has any adverse effect on pregnant women.

The petition also appealed for separate vaccination centres for pregnant women and lactating mothers since they fall in the high-risk category. Furthermore, it also sought to engage Anganwadi centres and Asha workers to work for the vaccination drive so that they could reach out to everyone even the lactating mothers and pregnant women from   low socio-economic backgrounds.

The Petition also contested the advisory of the respondent dated 14th January 2021  because according to the research documented by The Federation of Obstetric and Gynaecological Societies of India (FOGSI) the advisory is no longer valid and hence prohibiting lactating mothers and pregnant women from taking the vaccine is unconstitutional.

The Petition also demanded that the CoWin Portal which books the slot for vaccination should have another option for the lactating mothers or pregnant women so that they could be identified and prioritized while providing slots for vaccination.