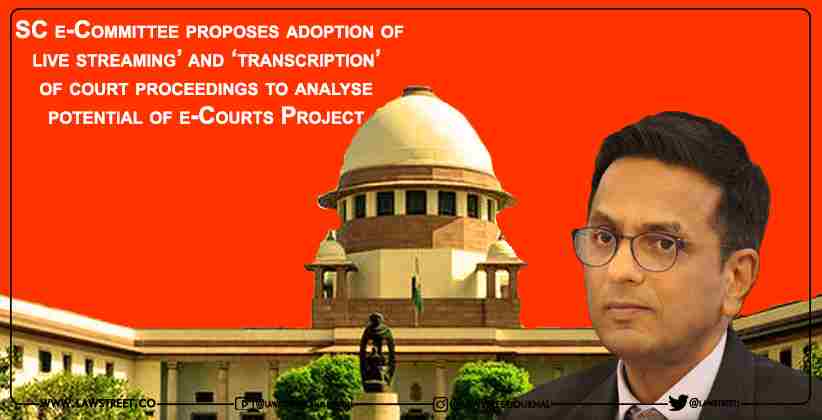 Legal Insiders Apr 06, 2021 Tanya Sehrawat ( Editor: Ekta Joshi ) 12 Shares
12 Shares
Adoption of ‘live streaming’ and ‘transcription’ of court proceedings has been suggested by the E-Committee of the Supreme Court in order to analyse the full potential of the e-Courts Project.

A draft proposal for Phase III of the of the Project has been released, the focus of which is creation of digital infrastructure along with availability of critical services to lawyers and litigants. Inputs and suggestions have been invited by the E-Committee on its email address.

Highlights of the Project can be summed up below:  Transcriptions Digital Transcriptions are supposed to be an exact record of what was said in the court of law. This will equip the lawyers and the litigants to be provided with technologically enabled transcriptions of court proceedings from audio or spoken format into a typed digital format immediately with the order.

The E-Committee claims that this step will aid the lawyers to plan their trials or appeals well before time along with understanding the decision and using the transcript as evidence with the opportunity to share everything with the litigants that could not be present then.

It will also be easier for the litigants and lawyers to locate the information and store it for their convenience. It will increase the access to court proceedings for the individuals that are differently abled.  The mode will be a win-win for the Judicial Officers alongside as the transcriptions may serve as a reference point, more so pertaining to the suggestions for the out of court settlements by parties ultimately seeking adjournments.  Live Streaming The E-Committee believes that access to justice can be increased greatly by allowing the live streaming of the court proceedings, in addition to reducing the environment costs along with the travel costs of litigants and lawyers.  The Draft Proposal lists exploration of varied forms of digitally enabled hearings for cases of diverse use. Possibilities of asynchronous hearings, purely digital hearings, audio-only linkages where necessitated or even virtual courts could be explored by the Courts.  The E-Committee observed, "Exploration and adoption of appropriate media would be key for timely delivery of justice.” However, the significance of in person hearings was emphasised by the Court for certain proceedings.  The focus of Phase III of the e-Courts Projects is supposed to be on enabling courts to deploy "quality digitally enabled hearings" based on nature and type of case.

"This will have to be supported by efforts by the High Courts to identify classes/ types of cases where in-person hearings should be retained, and where in-person hearings should be retained, and where various forms of digital hearings can be adopted", the committee said while further adding, "Digital hearings should also be supported by efforts to make the hearing public, and the process transparent. This can be achieved either through live streaming of hearings or where that is not possible, by making records of the proceedings freely accessible to ensure courts retain the 'open courts' principle… This can promote transparency and optimise time of lawyers, litigants and judges, whilst shortening the timelines for deciding cases and increasing access to hearings for differently abled persons."

It was further stated how the management system, open hearings and digital transcription of proceedings will be of great help in assisting the judges in-charge of legal aid authorities in a more efficient and equitable allotment of cases to legal aid lawyers aided by data analysis. Other Proposals Digital Case Registry

The Digital Case Registry is going to comprise of all the data of the case including its unique number and case type. The aim of this is to build a unified case registry across different courts. This is going to ease the process of tagging of matters across jurisdictions along with enhancing the visibility of the status of a case for all parties involved and help access services related to a case.

Case Laws Repository A platform for free access to updated and comprehensive database of all legal precedents in India has been proposed by the Committee. This is going to ensure democratised access to precedents for users along with standardised citations across the judiciary. Digital Case Management Systems

Such system has been proposed by the Committee which can be easily accessed by the lawyers, clients, registry and judges, from anywhere.Such a system will enhance the capability to make documents machine readable as also SUVAS, along with enabling case documents availability in multiple languages. It is also supposedly going to allow seamless access and exchange of documents among authorised users and the development of applications and interfaces to use this data.

Remote Digital Assistance This service is proposed to be availed by the litigants for whom it might be difficult to access digital services or travel physically to the court premises. It could initially act as a help desk for litigants to help them find information pertaining to listing of their case or applying for a copy of an order or judgment to be sent by post, etc. This service can later be expanded to provide copies of orders or judgments in vernacular languages through post to the litigants.  Virtual Court

The Committee has also proposed automation of processes in a proceeding that would not require applying of the mind, for example, compounding of offences by payment of challans, probate proceedings where no objectors enter appearance, small cause money claims and mutual consent divorce pleas, etc.