Supreme Court Says, “Don’t Ask for Fee, Do it as Service to Institution” On Appearing as Amicus Curiae 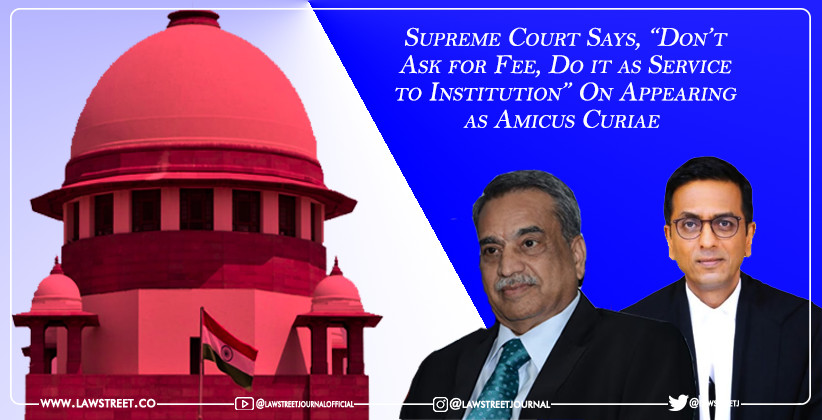 Legal Insiders Mar 17, 2021 Tanya Sehrawat ( Editor: Ekta Joshi ) 10 Shares
10 Shares
The petitioner-advocate in the instance was seeking recovery of his dues of Rs 10,000 and Rs 14,000 respectively from the states of Uttar Pradesh and Jharkhand for appearing as an Amicus. Along with this, he strived for Rs 5 lakh each as a compensation.

The matter was being heard by the bench comprising Justices MR Shah and Chandrachud. It was a writ petition under article 32 of the constitution on Monday (March 15, 2021). Justice D.Y Chandrachud told the Advocate, “When you appear as Amicus Curiae, don't ask for your fee. Do it as a service to the institution.” He also remarked, “Article 32 cannot be used for recovery of lawyers’ fee.”

The counsel responded, “there is no other effective remedy.”

Justice Shah questioned him on the additional compensation he was claiming, “Besides, you are asking for Rs 5 lakh, why?!”

The Advocate went on to explain, “"My fee has been delayed for five years now! I have repeatedly corresponded with the state governments but there has been no response to my emails…” This was followed by the Bench collectively dismissing the plea while saying, “"But you cannot come under Article 32. Take recourse to an appropriate remedy in accordance with the law.” Along with this, the Bench also took note of the fact that “for some inexplicable reason,” the petitioner also wanted compensation, which prayer is also “equally misconceived.”  The Advocate further highlighted, “There is only a provision for recovery of the fee as arrears of land revenue, but it is not an effective remedy. It turns out to be very expensive…”  Justice Chandrachud claimed to give him the best remedy in the following words:

"I will give you the best remedy. When you appear as Amicus Curiae, don't ask for your fee. Do it as a service to the institution. That is how we conducted our profession when we used to appear before the court.”