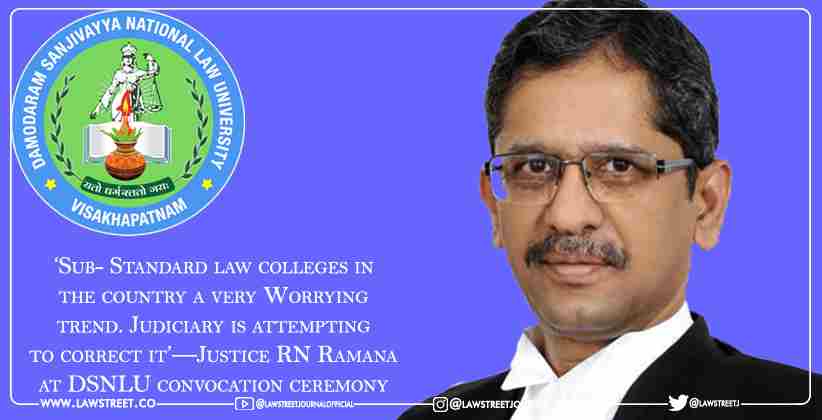 Legal Insiders Apr 06, 2021 Lawstreet News Network ( Editor: Ekta Joshi ) 13 Shares
13 Shares
On 4th April 2021, Justice Ramana gave an address at the convocation of DamodadaranSanjivayya National Law University (DSNLU) in Vishakhapatnam, Andhra Pradesh. While delivering his speech, Justice Ramana remarked that a huge number of Law colleges in the country is below par and that the judiciary has taken this into consideration and is trying to correct the same.  He further said that it is really amazing that in India there are more than 1500 law colleges including 23 National universities from where 1.50 lack students graduate each year.This clearly shows that the notion that the legal education is the profession of the wealthy class is disappearing.

Referring to the large number of law colleges in the country, Justice Ramana stated that it is often the case of " Quality over Quantity ". He further questioned that how many graduates are actually ready or prepared for the legal profession after their graduation?

According to him less than 25% graduates are ready to enter into the legal profession.  He however clarified that this comment in no means applies to the graduates who certainly have the qualities which are necessary to become the successful lawyers. Rather this applies to the inferior law colleges, which are only named universities. Justice Ramana while taking about the consequences of the poor quality of education provided by the colleges in the country said,

" One of the consequences of the poor quality of legal education in the country is the increasing dependence on the country. Although India has a good number of defense lawyers but still there are nearly 3.8 million cases pending in all the courts in India". Of course, this number should be viewed in the context of India’s population which is approximately 130 million. It also shows people's trust in the Judiciary. It should also be noted that the case filed yesterday will also be the part of the processing statistics.

He further stated thatyoung law graduates have the qualities to become the "Agents of Social Change” and that this responsibility is accompanied by the burden of amplifying the voice of those whose rights have been violated.  He urged the young students to be bearers of the national conscience andeducate people about their rights as much as possible and provide legal advice. “This is a heavy burden, but I'm sure all of you are strong enough ",he said.  Justice Ramana further added, "Through your determined efforts, you can enhance the capacity of the community locally as well as globally. You should always remember your voice is important". The opening ceremony was also attended by DamodranaSanjivayya, who is the Former Chief Minister of Andhra Pradesh and the Minister of Labor for the Government of India.  While commenting on DamodranaSanjivayya’s grit, Ramana said that everyone should learn from his life, his values, and his services to the people of the country.  On being the First-Generation Lawyer and Life Struggles:

While delivering the speech, Justice Raman stated, " When I compare my college years with the current generation, I feel that you are enough fortunate. You have a lot of resources, opportunities and unrestricted access to the world of information. With this knowledge and enthusiasm, you can develop new ideas. Through innovation, you can change the existing practices, systems and society as a whole can be improved"

Motivating the students, Justice Ramana quoted the British Prime Minister Winston Churchill, " Pessimists see difficulties in every opportunity, while as optimists see opportunity in every difficulty". He suggested the students should have a "Constructive Attitude" by which they will always attempt to determine solutions. Responsibility of Teachers and Reformation of Educational System: Justice Ramana also commented,"The main aim of education is actually to train the students and to prepare them to take part in nation building. This responsibility is wholly on the institutions and Teachers "

" In India the current Educational system is not equipped to build the character of young Students “,in order to develop a social consciousness and responsibility.” He further added while stating that students are often caught in the "rat race" and that all of us should make a collective effort to change the educational system to  ensure that the students can have the right outlook to their carrier and life outside.

Justice Ramana focused on the need for understanding the aspects of law. He said that the bookish knowledge is an incomplete understanding of Law, because any graduate who has just entered the industry will understand the law soon after starting the practice.  Law school, Legal Profession and Justice Delivery System: According to justice Ramana, the main goal of the law school is to make a law graduates socially relevant and technically sound. He has considered the young law graduates as the "social engine" because law is considered as "an agent of Social change".

Justice Ramana also stated that the law graduates should have the Flawless communication skills. He remarked that, “If a law student wants to further his practical knowledge, law schools should expose students to clinical education through LoKAdalats, legal Aid Centersand Arbitration and Mediation Centers. Students should activity work with legal services authorizes, as this will give the students an opportunity to work with the Justice Delivery System ".

Quoting the words of Mahatma Gandhi, Justice Ramana added, " Silence becomes cowardice, when occasion demands speaking out the whole truth and acting accordingly.” He further remarked that the law graduates are the agents of the social change they are burdened with the responsibility to raise their voice on behalf of those who's rights are violated.

He said, " The most vulnerable are often the victims of human rights atrocities, by either the state or by anti- social elements. As young Advocates, you are the best placed to strongly oppose the same through legal actions you must be the conscience bearers of the nation. Educate people about their rights and provide legal guidance whenever you can. These are heavy burdens to bear but I'm sure you are all strong enough to bear it." Concluding the address, Justice Ramana said,

“You are the stewards of this nation and the custodian of the very such tradition. I hope that you contribute in giving back something to this society, to this great nation which has bestowed you with so many privileges. Once again, I congratulate each and every one and wish you success in your future endeavors. God bless you and have a happy life ahead."