Supreme Court's decision to use A4 size paper will save 2,800 Trees, 1 crore litres of Water Annually 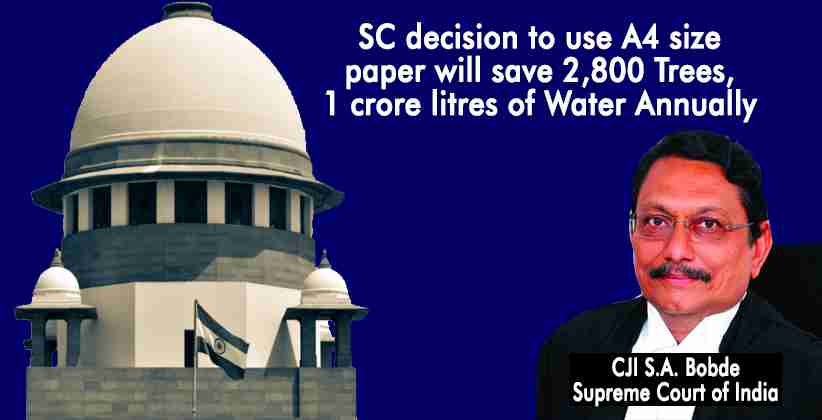 Legal Insiders Dec 07, 2020 Samit Siddhanta ( Editor: Ekta Joshi ) 4 Shares
4 Shares
After a decision was made by the apex court to only use A4 size paper for all its judicial and administrative work, the Supreme Court Registry conveyed that it is likely to save 2,800 trees from falling and conserve around 1 crore litre of water annually.

“This move is also likely to save 2 crore pages”, some sources in the Supreme Court Registry said. The step was initiated on January 14 2020 when CJI S.A. Bobde directed the SC Registry to use A4 size sheets, printed on both sides, for internal communication at all levels and then a new circular was issued on March 5 2020 which said that A4 size paper will be accepted on the judicial side from 1 April 2020.

Before the new rule, pleas were prepared on ‘legal size’ papers, bigger than A4 size sheets, & printing was permitted only on one side, raising environmental concerns over large scale wastage of paper in courts. CJI initiated innovative measures: On its advancement to convert a paperless court and also conserve the environment there are some series of steps taken by government both on judiciary and administrative level starting with a new app which will provide judges with the electronically. Sources of the news agency said that the new rules were made at the initiative of CJI SA Bobde. He has often shown his concern over trees and their importance over development. On Wednesday, December 2 2020,Bobde asked the UP government to consider realignment of the road to accommodate the trees.  Adding to this, he asked the State Government to assess the oxygen-releasing capacity of over 2,000 trees which the state has proposed to cut for the construction of a road falling in the Taj Trapezium Zone.  After new rules came into power from 1 April 2020 margins of the page was also reduced to one and half lines form two lines.  According to sources, six high courts — Calcutta, Karnataka, Kerala, Sikkim, Tripura & Allahabad — have adopted these innovative plans in their respective jurisdictions that are expected to have metamorphosis in conserving the environment. Registry officials said around 40,000 cases are usually filed every year in the top court, with an average paperbook size of 200 pages. And if we count according to the rules which says 4 copies of the paperbooks is needed to be submitted then around 800 pages are of paperbooks is submitted by attorney  with the court registry in connection with just one case. The amendment in rules now allows a lawyer to submit only two copies of the petition at the time of initial filing. “It is our estimate that usage of A4 sheets & both sides printing will help us save 1.5 crore pages annually. Reduction in submission of two paperbooks, as against the earlier requirement of four will further save 15 lakh,” explained another source. Some more steps are yet to be put in place to reduce the use of paper in the Supreme Court. The registry will soon make judgments & orders to various agencies available digitally through the official website of the Supreme Court instead of the printing & distribution of hard copies This is expected to save 8.5 lakh pages annually, another source added. Also, all communications made by the registry shall be sent to advocates via emails, followed by messages over the phone, in their registered mobile numbers. Based on an assessment, it was found that average consumption of paper between 2017 & 2019 in the Supreme Court just for administrative work, is estimated 20,000 reams which were annually utilized by the registry. The sources said, “As per generic estimate, one tree makes 16.67 reams of paper (8333 sheets) & around 500 ml water is required for one sheet".’ Security test of the e-filing module is also in progress. The Supreme Court had also held workshops for lawyers & their clerks in order to make them learn about electronic filing of cases. It was told by the Top Court to the news agency that e-filing of cases could be made compulsory from next year, once the court re-opens after winter vacations.