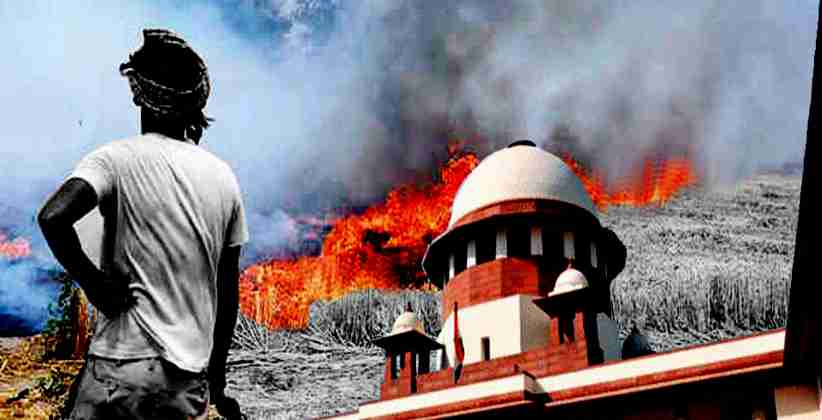 Legal Insiders Oct 08, 2020 Meghna Mishra ( Editor: Ekta Joshi ) 13 Shares
13 Shares
On Tuesday, i.e. 06th October 2020, the Supreme Court took a decision wherein it said that it will probe deeper into the suggestion to withhold a portion of Minimum Support Price form farmers until unless it is made clear that they have not indulged in stubble burning.

An application filed a Vikram Tongad, a farmer that urged the Court to come up with an alternative incentive mechanism for tweaking the amount of INR 100 per quintal was heard by a bench that comprised of Hon’ble Justices Chief Justice SA Bobde and Justices AS Bopanna and V. Ramasubramanium. The application also urged for the payment to be deferred from within the MSP until the court can verify that the stubble wasn’t burnt. CJI Bobde questioned whether the smoke emitted from the stubble burning would kill the deadly coronavirus. Senior Advocate Vikas Singh replied negatively, also adding that this can “aggravate the virus”. Senior Advocate Siddharth Bhatnagar also contended that he had filed an application that provided requisite directions and that continuous stubble burning will only aggravate the transmission of the coronavirus.

Senior Advocate Shyam Divan also contented that he submitted an application that urged the court to replicate the measures that were adopted to control forest fires and stubble burning.

"For forest fire, there is already a system, by which satellite imageries are captured, and messages are sent to the concerned forest officials for remedial measures. Why can't such measures be adopted with respect to stubble burning? The second suggestion is that a portion of Minimum Support Price should be withheld to verify if the farmer has indulged in stubble burning”, contended Advocate Divan

Advocate Charanpal Singh Bagri represented the farmers and actively objected to the withholding MSP for stubble burning. He also highlighted that the Apex court-ordered compensation to be granted to small and marginal farmers who refrain from stubble burning on November 5, 2019. The case will be further heard on October 16th, 2020.  “To stop the practice of stubble burning by farmers in the neighboring states, the Court directed the governments of Haryana, Punjab, UP and Delhi to grant financial assistance of Rs 100 per quintal within seven days to small and marginal farmers for handling crop residue of non-basmati rice to ensure that they do not burn stubble to clean their fields”.

Legal Insiders Jan 15, 2021 Lawstreet News Network ( ) 240 Shares
240 Shares
In a letter written by Senior Advocate and Former President of Supreme Court Bar Association (SCBA) Vikas Singh, addressed to Hon’ble Chief Justice of India S.A. Bobde regarding resumption of normal functioning of Supreme Court, Senior Advocate Vikas Singh has raised grave concern about the non-resumption of normal functioning of the Supreme Court.He further stated that Bar and Bench are the two main pillars on which the system of justice stands, however, recent turn of events have created a...
Read full post