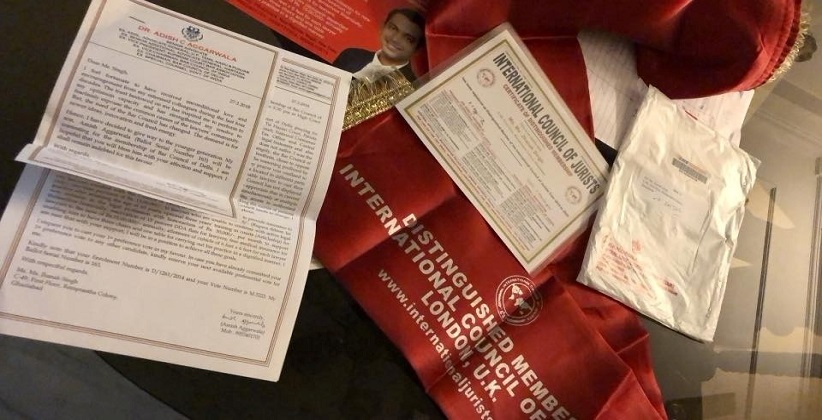 The polling for BCD elections had recently taken place on March 16th and 17th at the premises of Delhi High Court, Sher Shah Suri Marg. For two days the area was entirely jam-packed with lawyers, many could be seen distributing food parcels and strewing pamphlets around the area, trying to persuade lawyers to vote for their candidates.

This year the BCD elections have opened up after a gap of nine years and with 52,000 eligible voters to select 25 office bearers out of 173 candidates contesting for the position, the competition was really fierce.

The LawStreet Journal reporter has unearthed one such candidate, who resorted to unethical practices during the BCD elections.

In this regard, a membership certificate was issued to the lawyer containing his name, certificate number, and membership number. The membership was granted for a period of 5 years starting from 2018 till 2022. The certificate bears the signature of Dr. Adish C. Aggarwala and Sarah J. Marchington, who is a director of International Council of Jurist.

The point that should be noted here is that the membership of International Council of Jurist was granted to every lawyer without any application from the side of the lawyer. Even the annual membership fee which is 150 pounds for five years has not been paid by any lawyer. Such an act raises a serious question as to on what basis the International body is granting their membership to the lawyers?

The membership certificate which was dispatched in an envelope also contained two letters, one from Dr. Adish C. Aggarwala and another from his son Adv. Amish Aggarwala.

In a letter by Dr. Adish, sighting the demand for newer ideas, innovation and fresh energy in the Bar Council he wrote that "I have decided to give way to the younger generation. My son, Amish Aggarwala (Ballot number 163) will be contesting for the membership of Bar Council of Delhi. I am hopeful that you will bless him with your affection and support.

In the second letter written by Adv. Amish, he has listed his agendas which are: firstly, a one-time payment of Rs. 15, 00,000 to lawyers who are unable to continue with active legal practice after attaining the age of 60 years. Secondly, three-year optional training to new entrants in the legal profession with an honorarium of Rs. 30,000 per month to support themselves financially. Thirdly, reservation of 15% DDA flats for lawyers. Fourthly, free medical insurance for lawyers to the tune of Rs. 15, 00,000 annually and lastly allotment of cubicles to each lawyer.

Adv. Amish promising to achieve all these goals has at the end of the letter requested the lawyers to give him their first preference votes. But this poses a serious question as to how Adv. Amish is going to achieve all the above targets? His agenda of giving three-year training to a new entrant involves an expenditure of Rs.540 crores (taking approx. 5000 new enrollments in Delhi on an average). His other agendas also involve an enormous amount of expenditure. Without any source to generate funds to finance these aims, these are just a bunch of empty promises that were made by Adv. Amish. He with his agendas seem to build castles in the air for the motive of buying more votes.

Moreover, the certificate and letter also accompany a VIP parking slip valid till 2022 granted to every lawyer. This act gravely affects the structure of the Council, giving every 52,000 lawyers a VIP status.

As per the Modal Code of Conduct for Bar Council of Delhi Elections 2018 issued by Bar Council of Delhi on February 23rd, 2018. All the candidates seeking election as a member of the Bar Council of Delhi shall be prohibited from indulging in activities, which includes or considered to be corrupt practices and offences such as bribing of voters, offering or giving any gift or gratification for the purpose of inducing and influencing the votes.

The above act clearly qualifies as a corrupt practice on behalf of the father-son duo, as they are offering membership of an international organization as a mere gift without any consideration for a considerable period of five years. Dr. Adish is unquestionably misusing his position as the President of the International Council of Jurist to influence the votes.

The Bar Council of Delhi shares the information of the enrolled lawyers with the candidates for the purpose of using it ethically. But Adv. Amish, wrongfully shared all the personal data with the third party/organization, i.e., International Council of Jurist to fraudulently gather votes in the BCD elections. Recently, Union IT and Law Minister Ravi Shankar Prasad has lashed out on Facebook, saying that if any attempt is made by Facebook to influence India's electoral process by sharing the user data to political parties for campaigning, it will not be tolerated.

Adv. Amish engaging in a similar act as Facebook, by sharing the data of all the lawyers with the third party/organization has committed a very grave offence by intruding into the privacy of a person which is a fundamental Right as held by the Supreme Court in the case of Justice K.S. Puttaswamyv. Union of India.

Furthermore, by this appalling act Adv. Amish Aggarwala has also breached another clause of the Modal Code of Conduct for Bar Council of Delhi Elections 2018, in which it is stated that the maximum permitted expenditure of each candidate in campaigning shall be Rs. 1,00,000. Adv. Amish by sending these letters to every lawyer enrolled in the Delhi Bar has surely surpassed the minimum limit of expenditure.

The Law Street Journal reporter on inquiry with other lawyers has come to the knowledge that they deeply oppose the move taken by Adv. Amish. A lawyer who doesn't want to be named, expressing his views has said that this is a highly disgraceful act. They made every lawyer a member of an organization without their written or oral consent. Elections are the time of intense competition, but they should not forget that our votes are not for sale."

The membership of the Bar Council has become a much-coveted office as its members yield extra-official authority and attempts are made to win the elections by indulging in various malpractices. But Adv. Amish together with his father Dr. Adish Aggarwala has gone beyond the limits of what is acceptable by immorally influencing the voters and sharing their personal data with an outside body. Such candidates who participate in unethical activities during the election should efficiently be weeded out.