A Woman CJI Has Never Been There; Greater Presence of Women in the Judiciary Would Help Balance the Approach in Cases of Sexual Violence: AG KK Venugopal 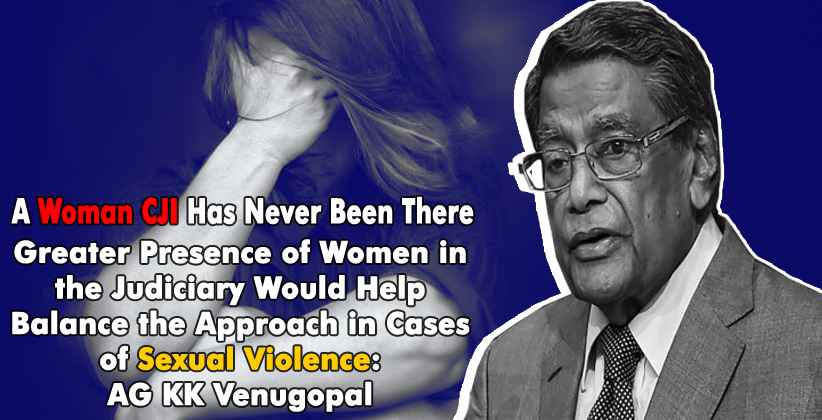 Legal Insiders Dec 03, 2020 Atharwa Gauraha ( Editor: Ekta Joshi ) 5 Shares
5 Shares
Attorney General K.K. Venugopal told the Supreme Court that having more female judges at all levels of the judiciary might be more empathetic in sexual violence situations. While arguing its case, the AG referred to the fact that India's Chief Justice has never been a woman, and that the Supreme Court currently has only two female judges.

Venugopal also said, “Improving the representation of women in the judiciary could also go a long way towards a more balanced and empathetic approach in cases involving sexual violence. For instance, this Court (SC) only has 2 women judges, as against a sanctioned strength of 34 judges. There has never been a female Chief Justice of India.” In July of this year when the judge asked the accused to make the victim tie a rakhi on him the AG replied to a petition challenging the bail conditions imposed by the Madhya Pradesh high court. As The Wire reported them, the court also asked the man to give Rs 11,000 to the woman on the occasion of rakhi, tender Rs 5,000 to the victim's son for the purchase of clothes and sweet and seek her blessings as part of a customary offer offered by brothers to sisters.

This order, along with a few other high court orders, had been criticized by nine Supreme Court lawyers, led by lawyer Aparna Bhat, for claiming that the judiciary had no empathic approach when it came to cases of sexual harassment. "...there is a strong probability that such observations and guidance may lead to the normalization of what is essentially a crime and has been recognized by law to be so," said their petition to the Supreme Court. Justice A.M. Khanwilkar, while noting that the MP high court order had already been complied with, asked what could be done to avoid such occurrences in the future. It is on that notice that the AG gave his suggestion. According to a report, Four recommendations were made by Venugopal: to gather data on the number of female judges in the lower courts; to gather data on female judges in the courts; to decide the number of senior judges appointed by all the high courts, year-wise; and to ensure greater representation of women at all levels of the judiciary, including the Supreme Court. In addition, the AG also suggested that the judiciary create guidelines on the granting of bail and anticipatory bail, to ensure that the courts use only permissible terms and conditions, and to raise the consciousness of gender throughout the judiciary, where the judges learn to position themselves in the victim's shows.