Home Labelling of Imported GM Foods: Consumer’s Legal Right Vs Technological Limitation. What should India do?

Labelling of Imported GM Foods: Consumer’s Legal Right Vs Technological Limitation. What should India do? 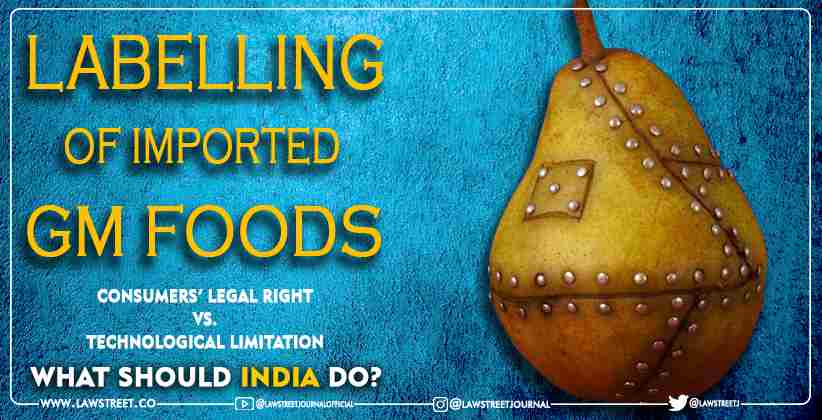 India is an important large number of food items and consumers are consuming them without knowing what they are eating. Consumers have a right to know how food is produced. Many consumers are now very sensitive hence there are many social movements towards the environment, animal welfare, GMO, vegan, organic production, responsible fishing, water footprint, etc

“Right to Know” is Fundamental Right as well as Commercial Right

GM food labelling is one such interesting area for techno-legal analysis. Consumers have the right to know how food is produced and delivered to them because their actions can impact various dimensions of society, the environment. Consumers want to make an informed decision and do not want to be a party to any process and decisions that are not in line with their beliefs and ethics.

We should keep in mind it is a very complex issue because stakes are very high for all stakeholders. This issue has many interlinked dimensions. Approval of GM technology used in the food system in India will have serious implications on law, society, religion, ethics, environment, technology, politics and economy. It is a more complicated issue in a complex society like India where there are so many religious and emotional issues related to plant and animal life. In a society where plants and animals are worshipped, the identity preservation of the living objects matters.

Why is GM labelling crucial?

The way genetic technology is advancing, it is possible that genes of one species can be administered into another species. It is also possible to inject genes of animals and insects into fruits and vegetables to improve a particular trait. Example: genes from pig if introduced into tomatoes to improve the shelf-life and hardness of the tomato skin of the tomatoes to minimize transport damages., or fish genes into some other crop, etc. to improve keeping quality or vitamin content in the product.

Law should facilitate an informed decision:

When the situation is complex, the simple and effective approach is to increase transparency in decision making at all levels. So that people make an informed choice. People may want to know what they are eating. When it comes to food, ultimately, the consumer has to take a final call to eat or not to eat.

Consumers have the right to know and WTO:

On July 5, 2011, More than 100 countries agreed on long-overdue guidance on the labelling of genetically modified (GM) food. The Codex Alimentarius Commission of the UN, made up of the world’s food safety regulatory agencies, has been labouring for two decades to come up with consensus guidance. In a striking reversal of their previous position during the annual Codex summit in Geneva, the US delegation dropped its opposition to the GM labelling guidance document, allowing it to move forward and become an official Codex text. The new Codex agreement means that any country wishing to adopt GM food labelling will no longer face the threat of a legal challenge from the World Trade Organization (WTO). This is because national measures based on Codex guidance or standards cannot be challenged as a barrier to trade. This will have  immediate implications for consumers.

All food products, whether organic or non-organic, must comply with the labelling rules. These Consumer Protection ACT and FSSAI Act must ensure that labels be:

In addition, special labelling is required for all foods, including GM foods, where there are health and safety concerns such as:

Such labelling is required to alert consumers or susceptible groups in the population.

The regulatory approaches on GM food labelling vary in different countries and areas. This can be broadly classified as voluntary or mandatory.

For the voluntary labelling approach, only GM food that is significantly different from its conventional counterpart, in terms of composition, nutritional value and allergenicity, needs to be labelled.

For the mandatory labelling approach, it can be further classified into two categories, i.e. "pan-labelling" or "labelling for designated products only". The "pan-labelling" category requires that any food products, which contain GM materials exceeding a threshold level or have any significantly different characteristics as a result of genetic modification, must be labelled.

3. "Labelling for designated products only"

The requirement to label all GM foods is not easy to enforce because:

Issues to be considered in Setting-up a Labelling System:

Different labelling approaches have their merits and shortcomings. Issues to be considered in setting up a practical and balanced labelling system include:

Difficulties in the detection of GM materials include:-

100 plus countries in Codex meetings have agreed that GM labelling is important and should be done.

The Codex Alimentarius Commission (Codex) considers that governments of different places may make their own decisions on whether or not to label GMO food. The emphasises that labelling arrangements should be in conformity with the provisions promulgated by the Codex to avoid potential trade issues. At present, policies on GM food labelling vary in different countries and areas:

Canada and the United States

Labelling of GM foods is only required when the food is significantly different from its conventional counterpart in terms of composition, nutrition and allergenicity. However, the trade may label other GM foods on a voluntary basis. In Canada, a set of guidelines for voluntary labelling of GM foods was issued in April 2004. While, in the United States, public consultation on draft guidelines for voluntary labelling has been finished but finalisation of the guidelines is still pending.

Member countries from the European Union:

All GM foods have had to be labelled in countries of the European Union since 1998. This policy was amended by the European Commission in November 2003. The new requirement stipulates that all foods produced from Genetically Modified Organisms (GMOs) should be labelled, irrespective of whether the DNA or protein of GM origin is detectable in the final product. Moreover, conventional foods with the adventitious presence of GM materials of higher than 0.9% should also be labelled.

The Australia and New Zealand authorities decided that all food products produced or imported had to be labelled starting from 7 December 2001 when any of their ingredients contain more than 1% GM material. Additional labelling was also required for GM food ingredients with significantly altered characteristics. Highly refined foods, processing aids or food additives with the absence of GM materials, flavours in a concentration no more than 1g/kg in the final food, as well as foods prepared at point of sale are exempted from the GM food labelling requirement.

The Japanese authorities have required designated agricultural products and processed food items containing GM materials to be labelled. For the processed food items, those ingredients containing GM materials that are ranked within the top three constituents in terms of weight and the weight ratio of which account for five per cent or more of the total weight have to be labelled. Labelling is not required for oil and sauce, where the original GM materials can no longer be detected.

The Korean authority requires that all approved genetically modified agricultural products (including bean sprout originated from approved beans and other sprouts), which contain

more than 3% GM materials have to be labelled. In addition, processed foods that contained these approved GM products as one of the top five ingredients were required to be labelled.

In Taiwan, mandatory labelling of designated foods has been implemented by three phases according to the degree of processing of the food products, and the last phase has come into effect from January 2005. Under the labelling requirement, foods containing ingredients of GM soya bean or corn which is more than 5% the total weight of the finished product have to be labelled. Moreover, soya bean or corn, which is adventitiously or accidentally mixed with not more than 5% of GM varieties during harvest, storage, transportation or other reasonable causes, is regarded as "non-GM". Food products made of non-GM soya bean or corn may be labelled as "non-GMO" or "not-GM".

The Ministry of Agriculture enacted a regulation "Implementation Regulations on Labelling of Agricultural Genetically Modified Organisms" which was effective on 20 March 2002. Under the regulation, five categories of GM crops including soya bean, corn, cotton, rapeseed and tomato, as well as some of their products are required to be labelled. On the other hand, the Ministry of Health enacted a regulation, "Measures for the Administration of Novel Foods", on GM food in December 2007. This regulation stipulated that all GM foods should be properly labelled.

Other places in Asia

Some other Asian countries such as Thailand and the Philippines have also set up regulations on GM food labelling.

What Indian policymakers should do?

GM food is an interesting area for techno-legal analysis. We should keep in mind it is a very complex issue because stakes are very high for all stakeholders. This issue has many interlinked dimensions. Approval of GM technology used in the food system in India will have serious implications on law, society, religion, ethics, environment, technology, politics and economy. It is a more complicated issue in a complex society like India where there are so many religious and emotional issues related to plant and animal life. In a society where plants and animals are worshipped, the identity preservation of the living objects matters.

Traceability from GM seed to retailing is a must:

Codex Alimentarius Commission (“Codex”) adopted guidelines allowing the labelling of genetically modified (“GM”) food products. Clearly, the GM Guidelines suggest that countries may implement one of the many different approaches regarding the labelling of GM food products, provided that they are consistent with already adopted Codex provisions. In order to ensure the integrity of organic foods, there is an application of traceability systems, the similar concepts should be mandatory for GM crops as well. Food safety laws around the world are moving towards making traceability and identity preservation mandatory.

With the advancement of information technologies like blockchain, barcoding and QR codes, GPS, etc, it is easy to ensure traceability. Law should ensure labelling with suitable technology support to avoid any controversy and social and political implications.

In my view, it is useful to go for mandatory labelling to avoid any controversy in a complex society like India. Why policymakers avoid regulatory arbitrage in one form or the other. Let the consumer decide what they want to eat. The consumer should have the right to know.

Consumers ‘right to know should be respected. After all, it is their health, their beliefs, their own sentiments and their money, which they are sending. They must know what they are eating and serving.