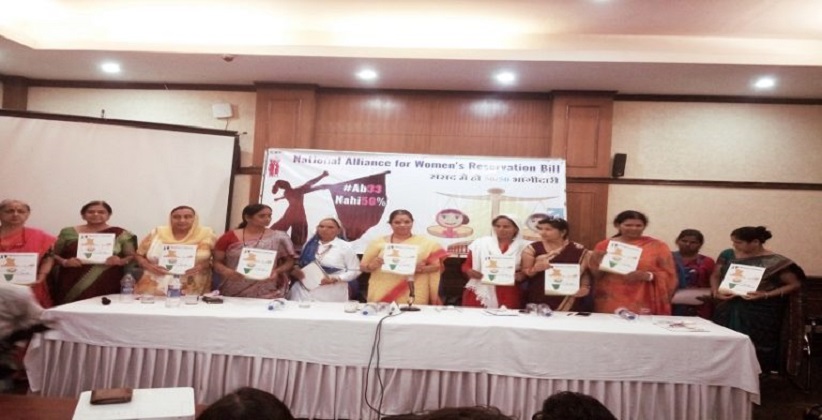 Women groups from across India assembled at Press Club, New Delhi on Friday, July 13, 2018, to share their concern regarding the passage of the long-pending “Women’s Reservation Bill”, which is the ‘most delayed’ bill in the history of Independent India. They expressed their disappointment in the government for not taking up this issue, and for not including the WRB in the agenda of Monsoon Session of Parliament.

The National Alliance for Women’s Reservation Bill has initiated a massive letter campaign, wherein more than 5000 letters have been sent to Prime Minister's residence to demand the passage of the Bill. The Alliance also released “Women’s Charter” for all the political parties, leaders, and opinion makers, which included the demand for passage of “Women’s Reservation Bill” among other demands.

"This is the last opportunity for the government to give representation to women, if left on political parties they will not do it, we have struggled for so many years and it’s time for justice and we should get justice. Many ordinances have been passed by the government even without people's consent but here all women are showing their grave concern but still, no response has been shown by the ruling government," said Dr. Ranjana Kumari, Director, Centre for Social Research.

Key speakers at the press conference included Dr. Ranjana Kumari, Director, Centre for Social Research, New Delhi, Ms. Asha Devi from Nirbhaya Jyoti Trust and members of several other women rights organisations. Village women from across India also assembled at the venue of the press conference and addressed the media.

Experts feel that the present BJP government has the required number of parliamentarians to pass the bill. In addition, the Congress party has also supported the Bill, so it would be easy to overcome resistance if there is any. In other words, a single landmark initiative of introducing the bill in parliament could mean changing the country for good forever.

The 22 year-journey of the Women’s Reservation Bill has hit roadblocks in each of its outings in Parliament before it cleared the first legislative barrier in 2010. According to media reports, a number of parliamentarians, over the years, have opposed the passing of the Bill, leaving it in its current state.

India is one of the world's worst countries in terms of women in politics. Data shows that there are only 96 women representatives in both houses of parliament in India. It ranks 103rd in the Women in Parliament study. In the Lok Sabha, out of the 543 members, only 65 are women. In the Rajya Sabha, on the other hand, there are only 31 female MPs among 243 members.