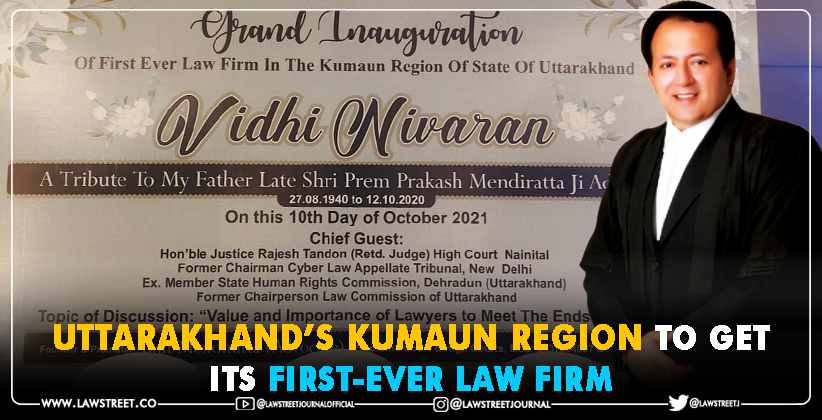 Even in the 21st century, there are many parts in India that are deprived of access to basic legal services to attain justice. One such place is Kumaun region of Uttarakhand. While the hill stations in Kumaun region are known for its natural beauty and salubrious climate, majority of people in Kumaun still face difficulties in accessing proper legal services, even in today’s day and age.

In appending legal services to the Kumaun district of Uttarakhand, ‘Vidhi Nivaran’ - the first-ever law firm in the region recently opened its doors to the public. Founded by Advocate Amit Mendiratta, the inauguration ceremony for the firm took place on Sunday, i.e., October 10, 2021, amongst the presence of noted members from the legal fraternity.

The Chief Guest for the event was Honorable Justice Rajesh Tandon, a retired judge of the Uttarakhand High Court and Senior Advocate at the Supreme Court of India. Justice Tandon has also served as the Chairperson of the Cyber Appellate Tribunal, Govt. of India, New Delhi, and as a member of the State Human Rights Commission, Uttarakhand and Chairperson of the Law Commission of Uttarakhand in the past.

The event began with a ribbon-cutting ceremony at Awas Vikas Colony, U.S. Nagar (where the office of the firm is situated), followed by a grand inauguration function held at Saphire Hall at Hotel Radisson Blu, Nainital Road.

The ceremony commenced with the lighting of the lamp and a speech by the Founder and Promoter of Vidhi Nivaran – Advocate Amit Mendiratta, followed by the Chief Guest’s address and a Felicitation ceremony. The event also entailed a topic of discussion for all the attendees on the subject ‘Value and Importance of Lawyers to Meet the Ends of Justice.”

Commenting on the chosen topic of discussion, Advocate Amit Mendiratta, in a statement to LawStreet Journal, said, “Lawyers play a very important role in helping litigants seek justice. Bar and Bench are two sides of the same coin or like two wheels of a bicycle. They work hand in hand to bring fair and fast justice to the ones seeking it.”

He further added, “I feel grateful and blessed to pay tribute to my father Late Shri Prem Prakash Mendiratta ji with the opening of Vidhi Nivaran. Our topic of discussion too is a tribute to my father. He was an ex-serviceman of the Indian Air force and was part of two wars for the country India in 1962 and 1965. Thereafter he pursued law in 1968-69. He remained in active practice for 50 years but unfortunately departed in wave 1 of COVID-19 in 2020….”

Commenting on the inauguration, Advocate Mendiratta stated, “We have launched Vidhi Nivaran today, which has been a dream project for me since 1999-2000. I wished to find lawyers of my choice and bring them together to form my own law firm one day…This occasion is extremely special for me.”

“I started my practice as an Advocate under the guidance of Chief Guest for our function, Mr. Justice Rajesh Tandon, and it is a matter of great pride for me that he is present here today to inaugurate my law firm. He is a mentor, a father figure, and my senior…my family and I are very happy on this occasion,” he further remarked.

Launched in a tribute to Late Shri Prem Prakash Mendiratta Ji, the law firm aims to provide sound legal services to the residents of Kumaun and enable them with the right means to justice. Vidhi Nivaran currently has a branch in Kailash Colony Delhi and has successfully operated within the legal industry since 1940. 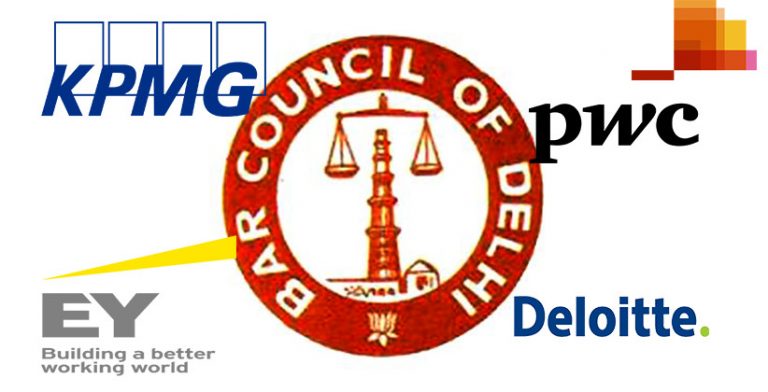 Legal Insiders May 03, 2019 Lawstreet News Network 0 Shares
0 Shares
Acting on a complaint filed by Society of Indian Law Firms (SILF), the Bar Council of Delhi (BCD) has directed the Big Four Accounting Firms – KPMG, Price Water House Coopers, Ernst & Young, and Deloitte India to refrain from indulging in any practice which would amount to practising law until further orders.The Bar Council has also directed them to give a list of all the advocates, who have been engaged by them, in any capacity, in any of their offices at any...
Read full post