Legality of e-signs in India 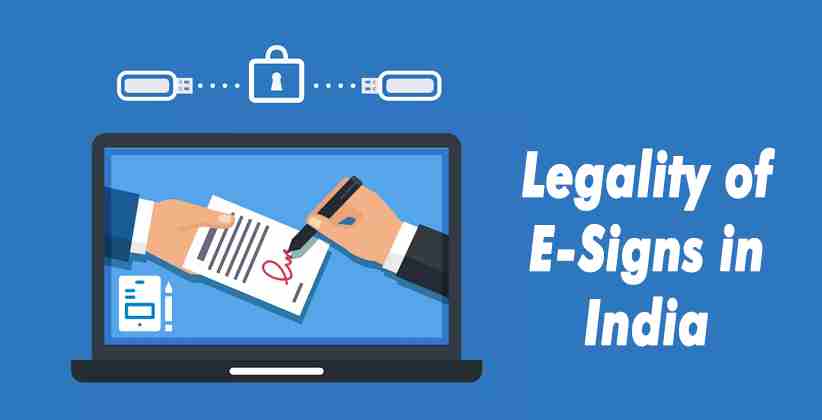 Speak Legal Nov 06, 2020 Rajdeep Singh Chauhan ( ) 14 Shares
14 Shares
Electronic signatures aren’t a recent phenomenon. We can found traces of e-signs around since the American Civil War, during which contracts were signed through Morse. In a modern time, an e-Sign refers to a unique, digitized, encrypted personal identifier. We can understand e-sign in short terms that it is different from the ‘wet’ signatures created by hand. The basic meaning of e-sign is to complete transactions, loops, and agreements electronically. In our country it is already accepted that electronic signatures as legally valid since 2000, with the introduction of the Information Technology Act 2000.Validity of e-signs In India, the e-Sign has been granted legal status by amendments to various laws, namely the Information Technology Act, the Indian Evidence Act, and the Negotiable Instruments Act. In the financial sector, people have already started using e-Sign to get customers to sign loan and card applications, and loan agreements. Licensed Certifying Authorities issue Digital Signature Certificates under the Ministry of Information Technology which secures the use of Digital Signature Certificates authentic and valid, just as any type of signature which is on the paper. Electronic signatures can also use as proof of signature and presumption to electronic agreements under the Indian Evidence (Amendment) Act, 1882. Digital Signature Certificates can be generated for Aadhaar based e-sign as well, and it can be viewed by individual by just clicking on the e-Sign button on the browser. At the present time, it is safe to state; there has been a significant increase in the uses of electronic signatures all over India. The invalidity of e-sign No doubts that e-signs are valid in India but there are some documents that could not be present through digitally signatures. There are many reasons behind it and the central government also not support promoting those documents with electronic signatures. So The Central Government has stipulated that electronic signatures cannot be used on every type of documents. Any electronic signature used on any of the type documents which are listed below will not make such a signature or the document itself valid. Under Section 1(4) of the Information Technology Act, 2000, electronic signatures or the statute IT Act itself will not be applicable to, Causes that make e-signatures valid in India There are 5 bold factors given under the IT Act which are responsible for the validity of e-signatures across India.