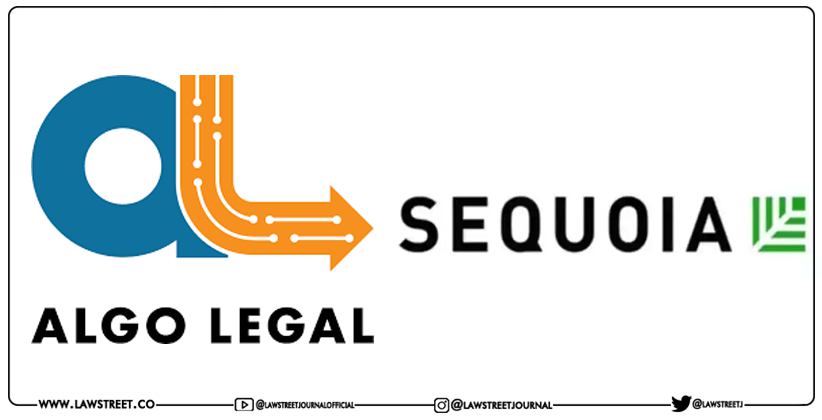 Algo Legal has filed ₹1 crore defamation suit against Sequoia Capital and various media outlets and journalists. Algo Legal and its founder Sandeep Kapoor have claimed that the publication of false news items resulted in the exit of three partners and several lawyers of the firm.

Algo Legal and Kapoor have demanded damages worth Rs. 1 crore, claiming that an offence under Section 500 (Defamation) of the Indian Penal Code, 1860 has been established.

The plaint filed before a Bengaluru court states that,

The exodus was reportedly prompted by reports in numerous media publications that Sequoia Capital had sent a letter to a select group of its portfolio companies informing them that it had stopped working with Algo Legal and its founder Sandeep Kapoor, who was Sequoia's former General Counsel. It went on to state,

"...termination of the Plaintiff's services had occurred on 31.01.2022, however the same was not published by the Defendants until June 2022. There is no explanation as to why the same was not published for six months and why no verification was undertaken by Defendants from anyone else, from 31.01.2022, prior to publication on 03.06.2022, given that the harm to the Plaintiff's reputation and business was apparent and foreseeable..."

The plaintiff stated that the articles were published in violation of "all norms and canons of responsible journalism" and that the media had an obligation to approach the individual in question before publishing a story to ensure that there was no false reporting. Kapoor stated that he had urged Economic Times journalist Digbijay Mishra to delay publication of his article due to a personal engagement, and that he had even agreed to meet with the reporter in person to clear the air. Mishra, on the other hand, refused to put the article on hold and went ahead and published it.

In the complaint, Kapoor claimed that the news articles were deliberately motivated, loaded with canards, and involved deliberate misrepresentation of facts; and that, as a result, he has been ridiculed and jeered in social circles; and that his good reputation has been tarnished.

According to the plaintiffs, Algo Legal's market position has been negatively harmed as a result of the fiasco.

While justifying the need for an order granting relief, the plaint stated that,

"The continuous adverse publicity of the Plaintiffs, who are seen from the eyes of public confidence and faith, is destructive of their reputation. It will also result in creating an atmosphere in the form of public opinion wherein the Plaintiffs may not be able to put forward their defence properly and the likelihood of getting a fair trial would be seriously impaired."

It went on to say that, rather than apologizing and retracting the allegedly false allegations in the articles, the media outlets continue to disseminate false and malicious allegations.

They've also asked for an order for media outlets to permanently erase the offending publications and to refrain from publishing anything else carrying the same or comparable allegations in the future. The plaintiffs have also asked the defendants for an unconditional apology.

They have also reserved the right to charge and array anyone, including individuals, social networking platforms, media outlets, and publications, who make similar allegations in the future.

HT Media Limited (owner of Hindustan Times and other publications), Bennett Coleman (owner of Times of India, Economic Times, and others), the owners of News18, journalists from these publications, and from Twitter are among the parties in the suit.

On Tuesday, a Bengaluru court was witness to arguments by senior advocates in the defamation suit filed by Algo Legal and its founder, Sandeep Kapoor against Sequoia, Twitter, and various media outlets.

Judge MH Annayyaanavar of the City Civil and Sessions Court heard the submissions and reserved his order.

Senior Advocate Sajan Poovayya, who represented Sequoia, insisted on being allowed to argue before an interim order was granted. Poovayya claims he has the right to file pleadings in both an interim application and a plaint. He also defended the act of calling out the lawyer (Kapoor).

"If there is one lawyer who is a crook, then it is in the interest of the bar that it is called out. In such an event there is no question of injunction."

Senior Advocate Udaya Holla argued for an interim order on behalf of Algo Legal and Sandeep Kapoor. He argued that,

"These funds come here and are now making allegations. Is it their argument they will go ahead with defamatory statements...Reputation cannot be sullied. Innuendo is evident."

In addition, he draws comparisons between Sequoia and the East India Company.

In response to Holla's comparison of Sequoia to the East India Company, Poovayya said,

"I am not here to usurp land. I do my business here as per Indian laws, pay my taxes here. And the plaintiff was my employee for ten years whose kitchen fire burned because of me."

Twitter's advocate, Manu Kulkarni, argued that an intermediary cannot be held accountable for third-party posts placed on its platform.

"I am an intermediary. Can an injunction be granted against me? There is a specific provision on this. Section 79 of IT which exempts me from third party information or communication."

Even though the media companies' counsel asked for a hearing before an interim order was passed against them, Holla said that,

"I don’t want dissemination of defamatory content. Let them hold their hands."

HT Media Limited (owner of Hindustan Times and other publications), Bennett Coleman (owner of Times of India, Economic Times, and others), the owners of News18, journalists from these publications, and Twitter are among the parties in the suit.

According to the media companies and other respondents, Sequoia Capital had cut connections with Algo Legal after Kapoor allegedly threatened several of its portfolio companies.

Kapoor, who was formerly General Counsel at Sequoia Capital, founded Algo Legal, a law firm. According to his LinkedIn profile, he worked at Sequoia for nearly nine years before founding Algo Legal in 2019.

Sequoia informed its portfolio companies via email that "concerning incidents" involving Algo Legal had been found after a recent investigation.

Kapoor allegedly threatened some of the Sequoia portfolio companies with cases for violations of the Foreign Exchange Management Act (FEMA) as well as investigations by the Income Tax Department, the Enforcement Directorate (ED) and other government agencies.

Kapoor was also alleged of using his previous position as Director Legal at Sequoia to compel these portfolio companies to hire his firm (Algo Legal) or linked entities for all legal services.