Home Business Amazon to Hire 10,000 More Workers to Keep Pace With E-Commerce sales that have jumped During the Pandemic
Business 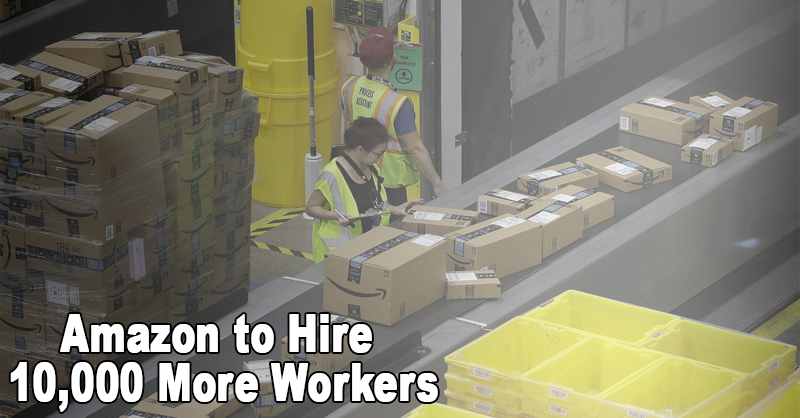 Amazon.com Inc on Monday ( September 14, 2020) said that it is recruiting 100,000 more workers-the fourth hiring spree it has announced for the United States this year to keep up with the surge of online orders.

The world's biggest online retailer said that the positions are for full and part-time work in its home country and Canada. The new hires will help pack, ship, or sort orders. It also mentioned that the jobs are not related to its typical holiday hiring.

The Seattle based company employed 876,800 people as of July 30, excluding contractors and temporary personnel. The business has boomed for the online behemoth. It made record profit and revenue between April and June, as more people turned to it during the pandemic to buy groceries and supplies.

The company already had to hire 175,000 new operation jobs in March and April, respectively. And last week it had 33,000 cooperate and tech jobs it needed to fill. In an appeal to people who were laid off by other businesses during the Covid-19 pandemic.

This time around, Amazon said it needs the people at the 100 new warehouses, package sorting centers, and other facilities it's opening this month. Alicia Boler Davis, who oversees Amazon warehouses, said the company is offering USD 1,000 sign-on bonus in some cities where it may be harder to find workers, such as Detroit, New York, Philadelphia, and Louisville, Kentucky. Starting pay at Amazon is $15 an hour.

"We will continue to deploy technology, where appropriate, starting from a safety perspective" and "where we can improve our overall operation," Bolder Davis said in an interview.

She did not have a comment on whether automation means fewer jobs per warehouse but said Amazon uses its system for collaboration with people. "We don't look at it as an 'either/or'".

Boler Davis, recently appointed to Amazon's senior leadership team, said that the company is still evaluating seasonal employment needs for the winter holiday, apart from 100,000 positions it is filling.

Things are going to get a lot busier at Amazon's warehouses. In addition to the holiday shopping rush, Amazon plans to hold its one of its busiest shopping days, Prime Day, in the fall this year after postponing it from July.

Last year it hired 200,000 ahead of the holidays. One company is already preparing for the spike in orders: UPS said last week that it plans to bring 100,000 people to help it deliver packages during the holiday season.

Bizarre News: Farmer Gets Electricity Bill of Over ₹3 Crore for 2 Months