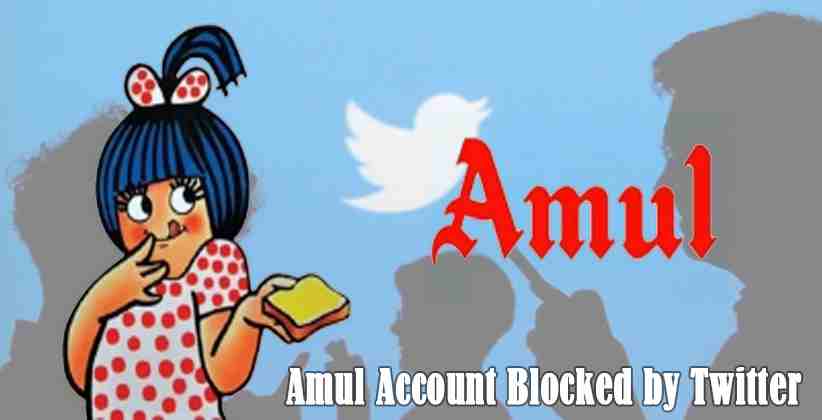 Twitter recently blocked the account of the owner of the Amul brand, of the Gujarat Cooperative Milk Marketing Federation after it posted a cartoon apparently calling for a boycott of Chinese Products. MD of the company R S Sodhi added that Twitter had blocked the handle after their advertising agency had posted a cartoon featuring its mascot ‘Amul girl’ with the caption ‘Exit the Dragon?’ on Thursday – June 4th, 2020.

To many, the cartoon appeared to be supportive of Prime Minister Narendra Modi’s ‘Atmanirbhar Bharat’ as well as a call for a boycott of Chinese Products on Indian Social media against the backdrop of a stand-off between the India and Chinese troops near the Ladakh border. However, on Saturday (June 6th, 2020) afternoon, Amul’s twitter handle was made accessible and the tweet containing the cartoon was also visible.

Asserting the tweet by the advertising agency, the MD contended that the company did not know why Twitter had blocked its account and clarified that Amul has not been running any campaign against anybody. Sodhi added, "We do not know why the account was blocked as we have not received any official statement from Twitter...Amul has not run any campaign against anybody. Amul girl campaign is on for the last 55 years, and our mascot generally talks about topical subjects, reflecting the mood of the nation in a funny way,"

It was later cleared that Twitter had initially blocked Amul’s handle but restored the same on successful communication and long-standing relationship. The managing director also said that the company had asked Twitter for reasons regarding the blocking of the account, however, twitter had not responded and given any official message yet.

Social media handles also came out in support of the company and accused the microblogging platform of a bias against India. A user commented, "Fantastic by @Amul_Coop. The dragon and their slaves got scared that they restricted the account. Imagine when our Army will be knocking Chinese doors," while another added, "Shocking @Twitter briefly restricted Amul account because of the post calling to boycott Chinese products. We Indians stand with our company's across India."