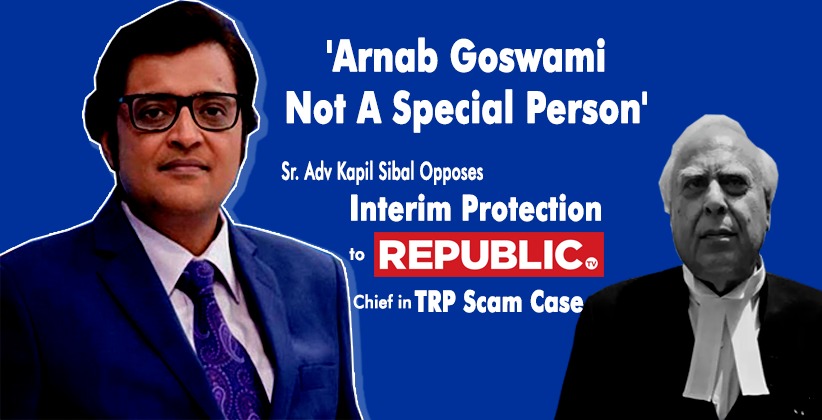 The Bombay High Court on Monday (October 19,2020) directed the Mumbai police to issue a summons to Arnab Goswami, the Editor-in-Chief of Republic TV, in the first instance if he is proposed to be added as an accused in the FIR alleging manipulation of Televisions Rating Points (TRP).

A bench comprising Justices SS Shinde and M S Karnik also recorded the statement made by Senior Advocate Harish Salve on behalf of Goswami that he will appear and cooperate with the investigation if such a summons is received.

The hearing witnessed intense exchanges between Senior Advocates Harish Salve and Kapil Sibal over the grant of interim relief.

Salve, appearing for Arnab Goswami, Editor-in-Chief of Republic TV, tried to persuade a bench comprising Justices SS Shinde and M S Karnik to grant him interim protection from arrest till the next date of hearing.

Salve contended that the Mumbai Police was acting with a vindictive mindset against Republic TV and Arnab Goswami on account of its reports criticizing the investigation in the Palghar lynching case.

Sibal, appearing for the State of Maharashtra and Mumbai Police, opposed by arguing that the petition was "premature". He submitted that Republic TV has not yet been named as an accused in the FIR and that the apprehension of arrest was unfounded. He urged the bench not to interfere with the investigation when it was at a nascent stage.

The bench then observed that the interim protection was not necessary at the present stage as Goswami has not been named in the FIR.

"Let him (Goswami) be not arrested without the leave of the Court", Salve persisted pointing to the fact that his client has strong apprehensions that Police might arrest him given the mala fides alleged in the case.

"Why? Is he a special person?" Sibal retorted.

"As of today, he (Arnab Goswami ) is not an accused. So we do not think there is any reason to pass an interim order of protection," the bench tried to dissuade Salve from pressing further.

But Salve continued to persuade the bench. He said, "There was no reason for the Police Commissioner to call for a press conference and make statements against me. This shows a lack of bona fides. If the police commissioner can rush to give such interviews, he can very well arrest me in no time."The bench replied: "We will grant you leave to approach us in such a case"."Let him be given 48 hours notice before the arrest," Salve replied."Arnab Goswami is not a special person. Press has no special privileges. The right remedy is Section 438 (anticipatory bail) and not under Section 482 (quashing of FIR)," Sibal intervened.

Sibal reiterated that no summons have been issued to the Republic TV Chief till now. If the summons is issued to Arnab Goswami he must cooperate with the investigation, Sibal added.

After that, the bench dictated the order regarding issuing of notice and posting of the case to the next date, November 5.

On noting that the bench has not mentioned anything about interim protection, Salve made further submissions. He said that he was under the impression that Sibal had undertaken not to arrest him till the next date of hearing and that the bench was recording the same.

"I thought Sibal was saying that they will not arrest him (Arnab Goswami) and not to record that statement formally. But now I understand that is not the position," Salve said.

"I never gave any commitment that he (Arnab Goswami) will not be arrested. I said that he should cooperate with the investigation," Sibal clarified.

At this juncture, Sr Adv Salve said, in that case, he wished to argue on the aspect of interim order granting protection from arrest. The police commissioner has accused him in a press conference, Salve reiterated.

Finally, after much back and forth, the bench observed: "We will only say if the investigating officer wants to question him, the summons will be issued. When a summons is issued, where is the question of the arrest? And in case of urgency, we will grant you the liberty to move urgently here. As of date, Arnab Goswami is not an accused in the FIR. In case, the investigating officer proposes to array him as an accused, in that case, the officer will issue summons to him in the first instance. In case the summons is received, Mr.Salve has stated that Arnab Goswami will appear and cooperate with the investigation."