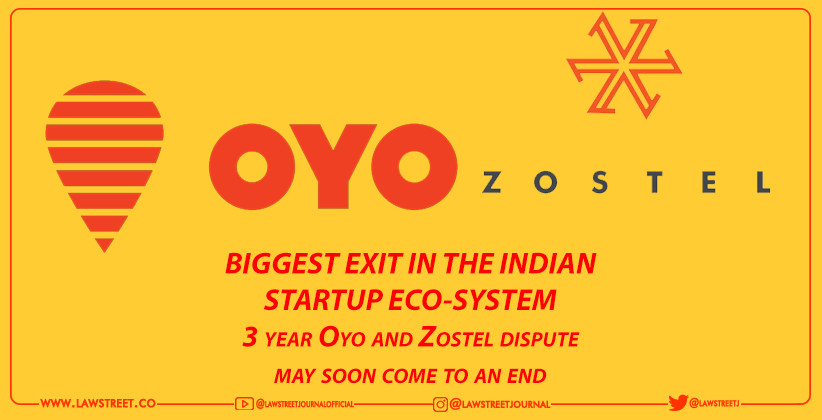 In a tussle that has been ongoing for 3-years of arbitration between parties, Oravel Stays Pvt Ltd (Oyo) and Zostel Hospitality Pvt Ltd (Zostel), an arbitral tribunal deciding Zo rooms could be entitled to 7% of the Oyo shareholdings which could give Zostel an opportunity to what could be called as the “biggest exit in the Indian startup eco-system”

The dispute between the two mega hospitality companies started after Zostel and Oyo entered into a merger agreement based a 2015 ‘Term Sheet’ which Zostel claimed is a legally binding agreement whereas Oyo disagreed and considered the agreement legally non-binding. Oyo considered it of "exploratory" nature on November of 2015, while Zostel had clamed to do their part of the agreement and had already transferred the business to Oyo.

The tribunal headed by former Chief Justice of India AM Ahmadi, as arbitrator in the dispute, as directed by Supreme Court. The Court believed that the dispute was to be resolved by Oyo because that was the only reason the parties were at dispute and disagreement.

This miscommunication lead to parties heading to arbitration which continued for 3 years. According to the agreement in questioning, Zostel alleged that Oyo owed them a 7% shareholding transfer to the shareholders of Zo rooms.

Oyo was known to raise $7.31 million at share price of $58,490, making it worth $9 Billion making this arbitral award, “the biggest exit in the Indian start-up eco-system after the Snapdeal-Freecharge deal of $400 mln in 2015.”

The court noted that in the dispute between the two giant companies, Zotel “did everything within their control to complete their obligations under the same and cannot be held responsible for the acts and omissions of Oyo and/or its shareholders by virtue of which some of the obligations could not be fulfilled by Zostel.”

Farm Laws- A perspective to move past the impasse