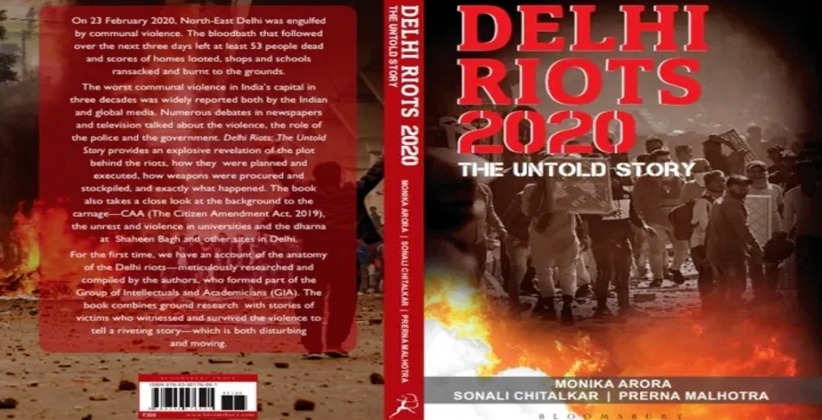 On Sunday, the authors of “Delhi Riots 2020: The Untold Story” have sent a legal notice to Bloomsbury India stating that their actions in withdrawing from the book, amount to a breach of contract. The publication had withdrawn the book just before a month of its release after condemnation from the netizens over the announcement of a launch event with BJP leader Kapil Mishra among the “guest of honor”. However, the authors have now decided to get the book published by Garuda Prakashan Pvt. Ltd.

The authors had written a letter via an email to Bloomsbury India asking them about the withdrawal of the contract, which was informed them over a phone. Earlier, it was informed that the decision was taken due to the pressure from Bloomsbury UK to disassociate from the aforesaid book.

Monika Arora, one of the authors and an advocate, stated that the actions of breaching the contract attract Civil and Criminal liability and that, the publishing house can be held responsible for damaging the authors’ reputation and causing mental agony. The author also mentioned that, while the copyrights, material, and previous drafts of the book are with the publishing house, they do not have the right to abandon the book. "All copyrights are with you, all material is with you, all previous drafts are with you. We designed the cover which was done and redone by your team and our team over the past month and the final designed cover sent to you by the authors and you approved it. All out intellectual property is with you. And you Bloomsbury who is an internationally acclaimed publisher who does not care for your authors who have reposed their faith in you. You do not even care to write 2 lines and even care enough to give reasons why you have abandoned and orphaned the book without even an official communication to authors who have trusted you and your professional standing as a publisher”, the advocate said.

The author also further mentions that Brown Lives Matter and even they have the right to Freedom of Speech and Expression. "May we add here that you can kill the supply of the book but not the idea and not the truth. Bloomsbury may we tell you that Brown Lives matter and Brown women matter too. We have the fundamental right of Freedom of Speech and Expression and of publication of our ideas which have been duly approved by you as a publisher”, the letter states.

Author and advocate Monika Arora through her Twitter handle informed that the publication has not responded yet and now they are looking for new publishers. She said, "No response from @BloomsburyIndia. No written communication to authors despite request. Our book can't be killed. People want to buy it. We have no option but to go with another publisher. The nation must know the truth of #DelhiRiotsTheUntoldStory. Pls suggest names of publishers”. Subsequently, it was informed that the authors have finally decided to go with the new publication namely, Garuda Prakashan Pvt. Ltd. "As per people sentiments, we are going ahead with @GarudaPrakashan LET THE TRUTH BE REVEALED #DelhiRiotsTheUntoldStory," a tweet by Monika Arora mentions.

On Saturday, a Bloomsbury spokesperson in its statement said that “In view of very recent events, including a virtual pre-publication launch organized without our knowledge by the authors, with participation by parties of whom the publishers would not have approved, we have decided to withdraw publication of the book.”

Bloomsbury India had decided to withdraw publication of a book on the Delhi riots of February 2020 amid the backlash from the twitter users worldwide. The social media outrage was triggered after a viral poster claimed that BJP leader Kapil Mishra who, incidentally, is one of the accused in the incident was a “guest of honor” for the book launch. While there have been no official allegations or sanctions against him, many people were disappointed by this gesture.

The authors have claimed a suspicion of a conspiracy to kill the book while analyzing the circumstances including instances such as backing off minutes before the book launch, removing the link from Amazon so that people cannot place orders, no prior communication regarding the same. The letter also mentioned that the publishing house failed in communicating with the authors to provide any clarification. the authors were informed after 24 hours of the official withdrawal. "You Bloomsbury have signed a contract with the authors. You Bloomsbury have over the past 3 months communicated with us through e-mails, SMS, WhatsApp all of which are in our possession. You Bloomsbury finalized the draft of the aforesaid book. Authors and you the publisher mutually suggested many changes and all were incorporated in the final draft which the authors finalized and as a publisher, you approved. You Bloomsbury emailed the final draft to tie. You Bloomsbury went ahead with the publication, published the books, and gave us 100 hard copies", the letter said.

The book has been authored by Delhi University professors Prerna Malhotra and Sonali Chitalkar, and advocate Monika Arora.