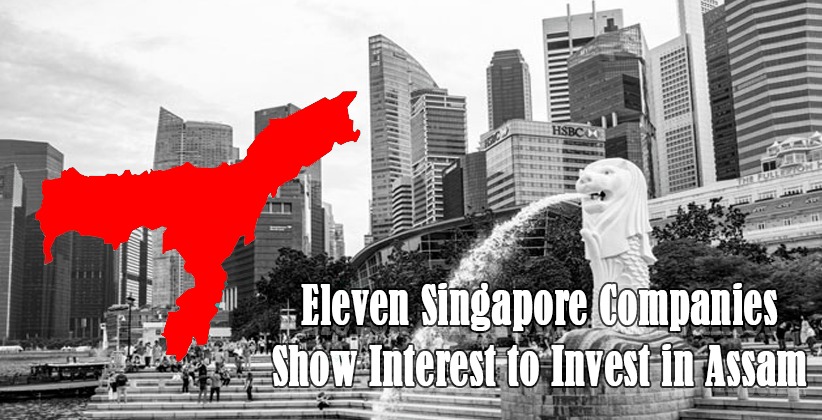 During an interaction with State Industries and Commerce Minister Chandra Mohan Patowary on Monday, 22nd June 2020, eleven Singapore- based companies have expressed their interest to invest in Assam. A Government release stated that the companies expressed their interest to invest in sectors like hospitality, food processing, infrastructure development, startups, skill training, industrial town development, airline catering, marketing, and organic farming.

Mentioning the locational advantage of Assam as the gateway to Southeast Asian Region, Patowary stated during the webinar that, “The state offers the perfect launchpad for the marketing of goods, products and services encompassing 80 million population in the Southeast Asian Region. Singapore can be a model for accelerated growth in the industry, trade and commerce, and education sectors in the state.” He further added that “Assam Government has tied up ITE Education Service, Singapore for setting up of a Skill University at a cost of Rs 850 crores at Darrang in Assam.”

The virtual interaction was coordinated and facilitated by Enterprise Singapore, a board under the Ministry of Trade and Industry in the SE Asian country and Invest India. The Government release said that the participants in the webinar included representatives from companies including Advanced Produce Centre Development Pvt Ltd (APC), Agrocorp, Capita Land (Ascott), Nanyang Polytechnic, Skill SG Venture (SSGV), ALLIN Technologies, etc.

The webinar stating the historical legacy, policy framework, robust infrastructure, and locational advantage are prerequisites for any investment that was also attended by Chief Secretary Kumar Sanjay Krishna. He cited the instances of the 150-year-old glorious tea industry and Asia’s first oil refinery at Digboi. Krishna addressed core economic components such as oil and natural gas, energy, food processing, agriculture, and highlighted the compound annual growth rate of 12% of Assam in the last five years. Dr. K K Dwivedi, Commissioner and Secretary of Industry and Commerce, gave a brief presentation highlighting the potentialities and opportunities of industry and business in Assam.

India is the second-largest tea producer and the fourth-largest exporter in the world, offering direct employment to 1.2 million people and supporting more than 3 million dependent tea garden workers. The Assam tea industry is reeling under cost pressure due to market inflation, increasing labor and other costs of production, the mismatch between demand-supply, high transaction cost, challenges to fair price discovery at auctions, and the climate change problem. Dipanjol Deka, Secretary of Tea Association of India, said, “The major problems are low price realization, escalating cost of production basically. The cost of production which includes fuel, coal, gas, and fertilizer costs are becoming very expensive. As far as the realization of cost is concerned, it has not improved in the last almost five years.” Assam tea currently contributes 52 percent of the total production of tea in the country. However, as this entire industry is facing a slowdown due to lockdown, it may face serious problems in the near future.

Stay on Jagannath Rath Yatra lifted by the Supreme Court