Home Business Fire at ONGC’s Gujarat Hazira Plant, No Casualty or Injury to Any Person Reported Yet
Business 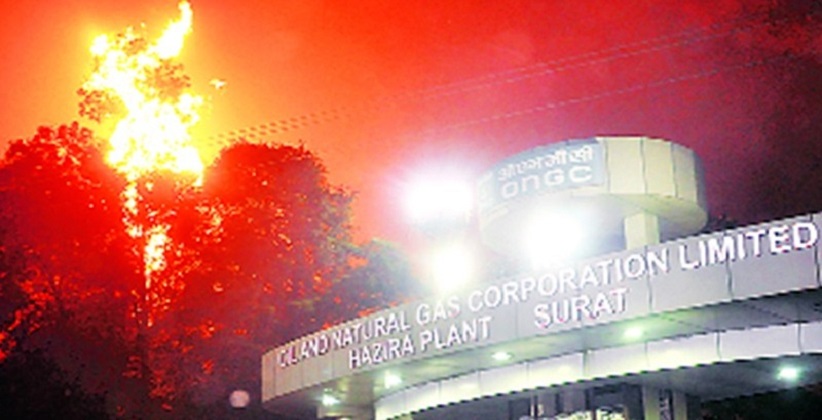 The Hazira plant of Oil and Natural Gas Corporation (ONGC) witnessed a huge fire in Surat, Gujarat in the early hours of the morning around 3 am. However, no casualty has been reported until now. Hazira port is located on the banks of Tapti River, 8 km away from the Arabian Sea.

Multiple blasts happened at the plant due to which the fire broke out in the inlet gas terminal and as per officials, the fire was visible from a distance and some videos also surfaced on social media of the same. Even the sound could be heard at a distance of 10 km. Many residents of the area mistook the effect of the blast as an earthquake initially.

The inlet gas terminal where the fire broke out was cordoned off and the plant secured, as per Dhaval Patel, Surat District Collector and he also added that the cause of the fire will be ascertained after the cooling operations were completed. He also said that no other industry in the area was affected and were operating in a regular manner. It was said that even the ONGC plant would be partially operational in a couple of hours. Also, it was reported that no people were in danger due to the fire and there was no need to shift the people of that area.

Reports claimed that the fire was apparently caused by a rupture in the 36-inch Uran-Mumbai gas pipeline but there was no confirmation from the district administration about these reports.

A tweet by the official account of ONGC read, "A fire was observed in the Hazira Gas processing plant in the morning today. The fire has been brought under control. There is no casualty or injury to any person. The fire has been completely extinguished. Efforts are being made to resume normal operations at the earliest”.

The activity of depressurizing the pressurized gas system underway by ONGC officials had started.

A source familiar with the matter said the Hazira plant processes gas from the Bassein gas field, offshore Maharashtra state, south of Gujarat.

This is the second mishap that took place in a state-owned oil company in recent months. An oil well in Assam which is also owned by Oil India Limited has been on fire since June 2020. Natural gas and oil condensate began leaking in the oil well in May and the leakage caught on fire on June 9.