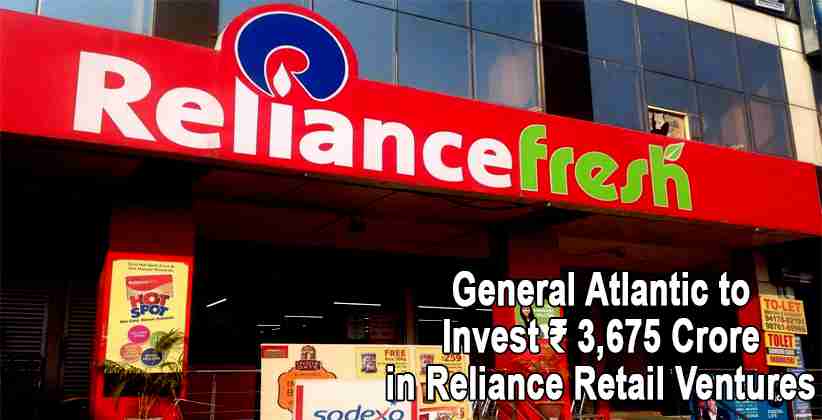 This marks the second investment by General Atlantic in a subsidiary of Reliance Industries, following a ₹ 6,598.38 crore investment in Jio Platforms announced earlier this year.

Reliance Retail Limited, a subsidiary of RRVL, operates India’s largest, fastest-growing, and most profitable retail business serving close to 640 million footfalls across its ~12,000 stores nationwide. Reliance Retail’s vision is to galvanize the Indian retail sector through an inclusive strategy serving millions of customers by empowering millions of farmers and micro, small and medium enterprises (MSMEs) and working closely with global and domestic companies as a preferred partner, to deliver immense benefits to Indian society, while protecting and generating employment for millions of Indians. Reliance Retail, through its New Commerce strategy, has started a transformational digitalization of small and unorganized merchants and is committed to expanding the network to over 20 million of these merchants. This will enable the merchants to use technology tools and an efficient supply chain infrastructure to deliver a superior value proposition to their own customers.

General Atlantic is a leading global growth equity firm with a 40-year track record of investing in the Technology, Consumer, Financial Services, and Healthcare sectors. As an integrated team operating under a global investment platform across 14 locations, General Atlantic invests behind themes that are driven by innovation and entrepreneurship and supported by long-term secular growth. General Atlantic has a longstanding tradition of backing disruptive entrepreneurs and companies around the world, including Airbnb, Alibaba, Ant Financial, Box, ByteDance, Facebook, Slack, Snapchat, Uber, and other global technology leaders.

Mr. Mukesh Ambani, Chairman and Managing Director of Reliance Industries, said, “I am pleased to extend our relationship with General Atlantic as we work towards empowering both merchants and consumers alike, and ultimately transforming Indian Retail. Like Reliance Retail, General Atlantic believes in the fundamental ability of digital enablement to drive progress, growth, and inclusion across India and the world. We look forward to leveraging General Atlantic’s extensive expertise at the intersection of technology and consumer businesses, and two decades of experience investing in India, as we create a disruptive New Commerce platform to redefine retail in the country.”

Mr. Bill Ford, Chief Executive Officer of General Atlantic, said, “General Atlantic is thrilled to be backing Mukesh’s New Commerce mission to drive substantial positive change in the country’s retail sector, which goes hand-in-hand with his vision to enable a Digital India through the work of Jio Platforms. General Atlantic shares Reliance Industries’ foundational belief in the power of technology to foster transformative growth, and we are excited by the immense potential of the full Reliance ecosystem. We are honored to again be partnering with the Reliance team to meaningfully accelerate India’s position in the global digital economy.”

Ms. Isha Ambani, Director of Reliance Retail, said, “We are delighted to welcome General Atlantic as a valued partner as we continue to develop and galvanize the Indian Retail ecosystem for the benefit of all Indian consumers and merchants. General Atlantic has tremendous knowledge in the retail space developed by working with leading consumer and retail companies globally over the years and we hope to benefit from that as we progress on our journey.”

Mr. Sandeep Naik, Managing Director and Head of India & Southeast Asia at General Atlantic, continued, “There is a pressing need for change in the Indian retail ecosystem. Reliance Retail’s strategy is unique – highly disruptive, and yet fully inclusive, it demonstrates a deep understanding of the diverse needs of India and Bharat, and the opportunity to provide more holistic omnichannel retail solutions to Kiranas and consumers.”