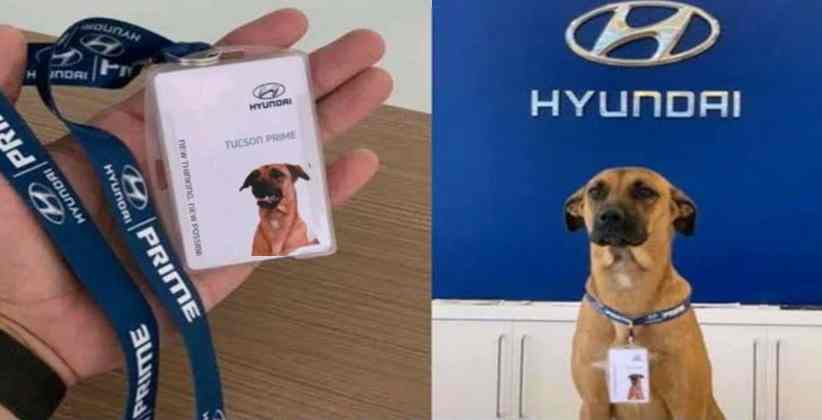 A Hyundai showroom at Serra in the state of Espirito Santo, Brazil, has adopted a street dog and named him Tuscan Prime, who is now a part of the establishment, he is appointed as an Honorary Employee and even has a customized ID card around his neck. However, his sole job is to greet customers who walk in.

According to the reports, the dog was adopted on 21 May 2020 by a car outlet in Serra in the state of Espirito Santo, Brazil. Since then, has been living in his own kennel inside the air-conditioned showroom. The employees have taken care of their nutrition, health as well as sanitation. He serves as the face of the outlet as he is the official ambassador and model for the Hyundai showroom.

Tuscan Prime has also been given an identity card and is the protagonist of a popular Instagram page. The account boasts of several cute photos of the dog and has a handsome following of nearly 30,000.

The heart-warming story of Tucson Prime has won thousands of hearts after it was shared on Instagram by Hyundai Brazil three days ago.

“Meet Tucson Prime, the sales dog at the Hyundai Prime dealership,” the automotive manufacturer wrote while introducing their newest employee on Instagram. “The new member is about a year old, was welcomed by the #Hyundai family, and has already won over co-workers and customers,” the post said.

However, this is not the first time that an animal has been adopted by a firm. Last year, a stray kitten was adopted by lawyers of a firm and made an employee there. Like Tucson, Dr. Leon, the cat, had also received his official identity card.