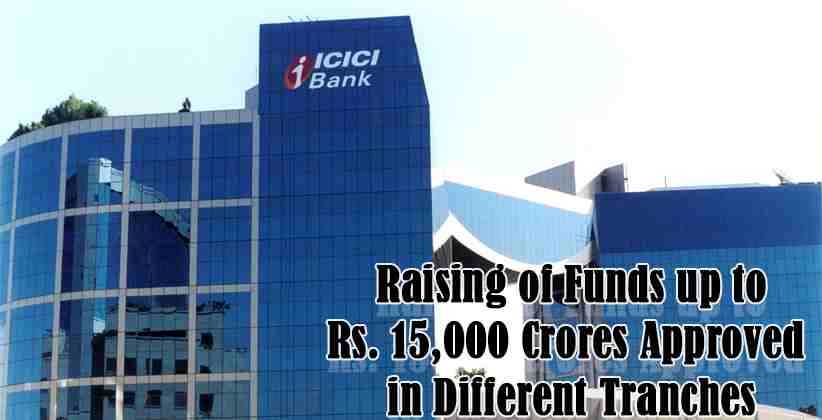 In a recent news, ICICI has decided to raise funds up to Rs 15000 Crores as confirmed by the board.

The bank said in a regulatory filing on Wednesday (July 8, 2020) post-market hours, that it has decided to raise funds through Private Placements, Preferential issue, Qualified Institutional Placement (QIP), and further public offer. ICICI has planned to do so because lenders would look at further strengthening the balance sheets as the opportunities arise as stated by it earlier.

Several banks like State Bank of India (SBI), Axis Bank, Yes Bank, Federal Bank among others have also announced plans to raise capital due to the outbreak of Novel Coronavirus Disease.

Sandeep Bakshi, ICICI Bank MD, and CEO has said on Thursday, 9th July 2020 that “We are conscious of the importance of Balance Sheet resilience in a highly uncertain scenario. Our current capital position is strong. We would continue to assess this and look at further strengthening the balance sheet as opportunities arise.”

Brokerage CLSA estimates a capital raise of 15000 Crores which would add around 190bps to FY21 CL CET-1 levels, which leads to a 4-5 percent impact on book value and dilute ROEs by around 110bps for FY23CL.

CLSA said in a note “Fundamentally a pre-provisioning operating profit (PPOP) to loans of 8 percent over FY21+22CL, current CET-1 level of over 13 percent and 30bps of capital accretion from subsidiary stake sale should suffice for expected Covid-19 provisioning cycle. Also, in our stress case-sensitivity, we estimated ICICI bank to require 8,300 Crores of capital to maintain 13 percent CET-1 levels. But we believe the threshold CET levels of most banks managements now are higher due to Covid-19 uncertainty.”

CLSA has reiterated that ICICI bank as one of its top picks.

Meanwhile, Jeffries believes that capital raise could drive banks EPS dilution of 6 percent and its FY21 net worth may increase with near-term RoE dilution.

The brokerage has maintained ‘buy’ rating with a target price of Rs 460 per share. At 10 AM shares of ICICI Bank were trading at 0.73 percent higher at Rs 371.60 apiece on the BSE.