Landomus Group, headquartered in the United States, wants to spend $500 billion in India's NIP; Twitter critics point out flaws in the results 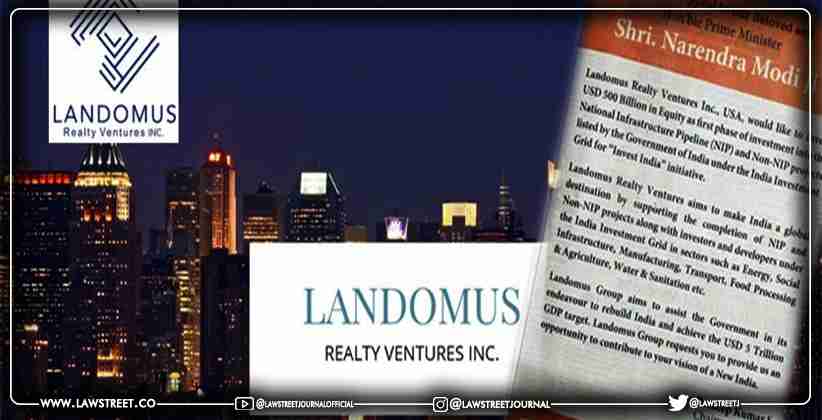 On Monday (May 24, 2021), a suspicious commercial on the front page of a leading Indian newspaper went viral. A firm called Landomus Realty Ventures reached out to Prime Minister Narendra Modi in a huge front-page commercial that can be seen in many city editions, expressing his intention to inject $500 billion in equity into India's National Infrastructure Pipeline (NIP).

The business shared its desire to invest in India by placing a front-page ad in a major newspaper pleading with Prime Minister Narendra Modi to do so.

"Landomus Realty Ventures Inc., USA, would like to invest USD 500 billion in equity in the National Infrastructure Pipeline (NIP) and Non-NIP projects identified by the Government of India under the India Investment Grid for the 'Invest India' initiative as the first stage of investment." It aims to make India a global destination by assisting investors and developers in the completion of NIP and non-NIP projects in sectors such as electricity, social infrastructure, engineering, transportation, food processing and agriculture, water and sanitation through the India Investment Grid.

To place this figure in context, according to Forbes on May 24, the world's richest man, Jeff Bezos, has a net worth of $186 billion. And, while it's impossible to compare people to corporations, something doesn't add up.

For one thing, despite being headquartered in the United States, it contains no detail on any subject other than India and the message conveyed in the commercial addressed to the Prime Minister.

Since the advertisements first emerged on Monday morning, Twitter users have been out in force to express their cynicism. Although others point out the costs of those advertisements and ask if they were not flagged, some are busy debunking the company's website.

The corporation claims to be headquartered in the United States, and its website is hosted in New Jersey. However, according to a Zaubacorp page for Landomus Realty Projects, there is an active organisation in Bengaluru with the same name and some of the same team members.

"Landomus Realty Ventures Private Limited was founded on July 17, 2015. It is a non-government organisation that is registered with the Registrar of Companies in Bangalore. It has a Rs. 1,000,000 approved share capital and a Rs. 100,000 paid up capital. It is involved in Real estate operations of own or rented land," the Zaubacorp listing states.

Local police open an investigation into Mehul Choksi's disappearance, believing he may have left Antigua and arrived in Cuba