Home Business We Did No Wrong, And We Will Continue to Do It: Lawsikho Founder On Dating Webinar Controversy
Business 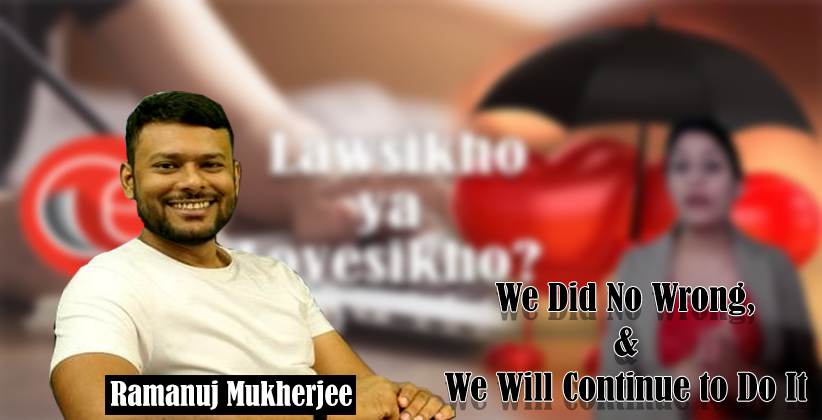 LawSikho.com, which is a legal educational platform and claims to have the “world’s most advanced practical legal training”, had recently hosted a webinar titled 'How can busy professionals have a dating life', which was advertised “for men only”.

The webinar was moderated by the CEO of the portal, Ramanuj Mukherjee. The speaker who was invited to advise the attendees on Dating was Kshitij Sehrawat, a self-styled “love guru” who also claims to have a “field experience” with women. He also runs a portal called “Iron man lifestyle” which charges a minimum of INR 15,000 to teach men on how to talk to “the cute girl you see in class every day”.

The private zoom session which in the form of the webinar was uploaded on YouTube (later deleted from the channel as well) and its conversations went viral receiving outrage from social media and audiences from both genders. Some people even went to the extent calling it “Lawyer locker room” similar to “the Bois Locker Room” which had become the talk of the town just a few days back.

Many questions were raised in respect to the webinar - ‘’By doing a webinar of this kind, is LawSikho trying to mainstream misogyny?”, “Does this not look like a professionals locker room focused on objectifying women?” among others.

Interestingly a young woman named Avanti entered the webinar and tried to explain to the host that these conversations were sexist. People at that time had sensed uneasiness on the part of both LawSikho founder and the lifestyle guru guest.

When LawStreet Journal Editor Kshipra Shriwastav approached Mr. Ramanuj to know his stand on the controversy, he clarified that they organized such a webinar as according to them there is a lack of awareness about dating and ‘how to do it right’ and also people sometimes don’t respect the concept of dating in general. He also defended himself by drawing attention to the initial monologue by him in the webinar where he explained to the attendees that dating should be done in the right manner and it should not lead to the objectification of women.

When the editor of LawStreet Journal remarked that LawSikho being a platform for legal education, why didn’t they focus on the legal aspects of dating in the seminar? To which, he answered that Lawsikho is essentially a community, sometimes they try to diversify topics while mentioning that they had earlier also conducted a webinar on live cake making.

When the Editor further probed him on the use of some objectionable words about women, which women themselves had objected to, he conceded by saying that at the end of the webinar some issues took place, which he, as a moderator should have handled properly.

Further, when he was asked about why some comments were deleted during the webinar, he defended himself by saying that they had not deleted any comments and just those comments which were abusive and not appropriate were deleted to avoid legal liability.

To the question  on why was it not possible to center the webinar around the law, where discussions could have centered around issues related to women who are in relationships and sometimes become the victim of acid attacks, he said that such type of webinars have already been done and promised to do many more in future.

“You mean to say your intention was correct but due to some unnecessary people it led to controversy” to this he remarked that the conversation went in the wrong direction. He tried to explain it by giving an analogy that there are some issues towards which men are blind and that they don’t get offended by an issue that would otherwise offend women.

He explained by saying that when a father brings a doll for his daughter and a ball for a boy, the father doesn’t intend anything wrong with it He said, “Their ( LawSikho’s) intention was to show the world how to do dating in a correct way as sometimes due to wrong way of it, boys are criticized for dating.” He also admitted that the selection of the coach who they had invited for providing dating advice at the webinar was wrong.

The selection of a wrong person for dating advice seems to be at the core of the controversy, as this self-styled love guru had asked one of the attendees to explain the meaning of ‘misogynist’ and ‘objectifying woman’, since he himself didn’t know the meaning of it. He also made some sexist remarks like, “worst person to take advice on dating is a woman herself”

In the end, Mr. Ramanuj apologized and promised to do better in the future by organizing regular webinars around gender studies.

“We were wrong to condone and host a webinar that spread such a problematic culture. We are reflecting as a team on good strong policies to ensure this never happens again. We unconditionally apologize for all the harm that was generated on this webinar. And we specifically apologize to Avanti for her voice being suppressed.”