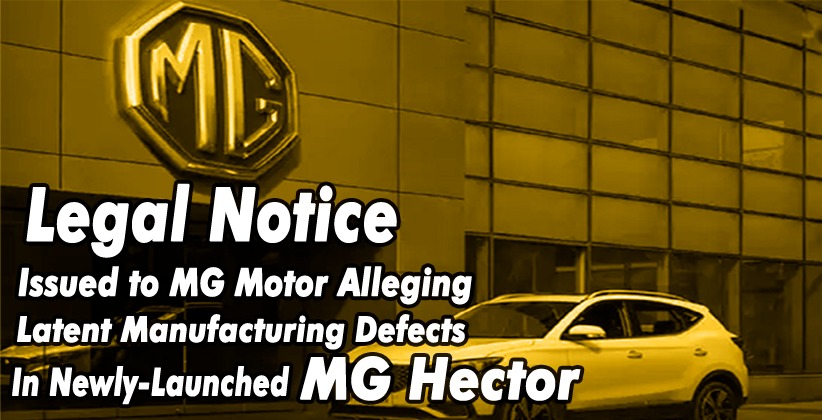 A legal notice has been issued to MG Motors by a lawyer. MG Motors is a British automotive marque founded by Cecil Kimber

The lawyer who had bought an MG motors’ car has accused MG Motors of latent defects in the newly launched MG Hector.

The defected car was delivered on 19th September 2020 to the Lawyer. He alleged that at the time when the car had gone for second servicing, MG Motors made a claim that various parts of the car have totally failed and become defunct. This redundancy happened because the water bottle which was kept in the car had spilled and entered crucial parts beneath.

To this claim, the customer raised an objection. He said that a car whose worth is approximately Rs.20 Lakh cannot be damaged from a minor water spill. He asked how damage can occur due to a minor spillage of water from a 1-liter bottle. After this, the company changed its statement and said that the water found inside the car was not the water from the bottle but was from the waterlogged in the car due to the rains.

The customer who is also a lawyer at the Supreme Court was aggrieved and has tendered a legal notice through Advocate Shashwat Anand seeking a full refund of the purchase price of the car which was around Rs.20 Lakh along with interest. He also sought compensation/damage.