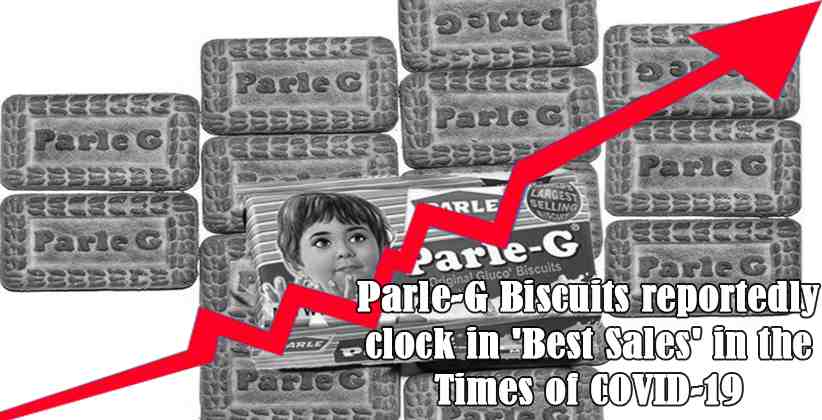 An old pastime of dunking Parley-G biscuits in a steaming cuppa, and deftly biting off the tea-soaked half before it crumbled over itself may have soothed the nerves of many sufferings from lockdown blues.

This 5-rupees-a-pack cookie came handy for many migrants who trekked hundreds of kilometers to get back home. While many stocked their kitchen cabinets with Parle-Gs, the do-gooders distributed them in sacksful to the needy.

During the period of coronavirus-forced lockdown in the country, Parle Products has recorded the best sale ever of its marquee product, Parle-G.

Although the biscuit maker did not reveal their official sales figure, they clocked record-breaking sales during March, April, and May. Parle-G has been manufactured since 1938.

The Parle-G sales numbers have helped Parle Products increase their market share in the country by 5 percent, announced Mayank Shah, Parle Products Category Head. "Parle-G sales accounted for 80-90 percent of this growth. That is beyond precedent, "he added.

Mr. Shah further said that the popular biscuit sales were pushed by bulk buying by NGOs and state governments as they bought them to distribute among migrant laborers who made arduous journeys to their hometowns on foot from cities across the country.

"This is the biscuit of a common man; people who can't afford bread buy Parle-G," Mr. Shah says about the appeal of the product to an average consumer.

A kilogram of Parle-G costs Rs 77 which puts it in the category of affordable or value.

The nationwide lockdown started for an initial 21 days on 25th March 2020 but has been extended several times since. It remains in place until 30th June 2020, relative to the early days of the lockout, but with major relaxations.

During the COVID-19 lockdown phase, the sales of fairly priced biscuits went up massively in the country as people stacked up on easy and simple essential food items.

Biscuits across price points have seen a massive surge in sales volumes over the past three months. Britannia’s Good Day, Tiger, Milk Bikis, Bourbon and Marie and Parle’s Krackjack, Monaco and Hide & Seek have sold significant numbers during the lockdown, experts said.

"Consumers were taking whatever was available - be it premium or economy priced. Some players may have focused more on premium value SKUs as well," said Anuj Sethi, Senior Director, Crisil Ratings, which recently conducted a thorough analysis of FMCG players.

"Players in the past 18-24 months had focused on enhancing distribution reach, especially in rural areas; this worked well for them during the pandemic," he added.

The company also restocked its distribution channels within 7 days to guarantee product availability at retail outlets during the COVID-19 lockdown phase.

Parle Products currently has 130 factories all over India with 120 of them continuously producing units while 10 are owned premises.

"Premiumisation in biscuits should be seen compared to other food categories, such as chips, chocolates, and soft drinks, most of which are more expensive than biscuits," Crisil's Mr.Sethi said.

"Consumers, therefore, make these trade-offs in the overall food category-not in biscuits, which has led to an increase in the consumption of premium biscuits," he added.