The courtroom battle in the Tata Sons case reached to day 5 of continuous hearings by the parties. CA Sundaram on behalf of Cyrus Mistry. Mr. Sundaram continued his arguments on the importance of prior consultation mentioned under Article 121 and Article 121A and 121B of the AoA of Tata Sons. Just three months prior to the removal of Cyrus Mistry, the meeting was convened.

According to the findings of NCLAT, it was of the view that Board of Directors had endorsed the recommendation of this Committee to applaud the performance of Cyrus Mistry and others by nearly 50 Independent Directors of Tata Group. On the argument of prior consultation, CJI SA Bobde asked Mr. Sundaram that merely because prior consultation is not permitted under Article 121, has it been completely prohibited under the AoA? Is there any national or international law which governs the issue of prohibition of pre consultation? CJI asked.

Also Read - [DAY6] Most crucial obligations on Directors is that they are fiduciary: Mr. Shyam Divan on behalf of Cyrus Mistry in Tata V Mistry Case

Mr. Sundaram replied “A conjoined reading of Article 121, 121A and 121B suggest that the intention was to have a majority control of Tata Sons.”The arguments then turned towards the discussion of independence of Directors which according to the submissions of Cyrus Mistry, was deeply affected and lost with the course of time due to the interference by other shareholders.

To make the situation easier to understand, CJI gave an example and sought Mr. Sundaram's response. Mr. Sundaram replied in the negative and remarked No, your lordship. If in order to preserve money in a company, somebody seeks assistance of someone outside respected by him or a former chairman, does it amount to loss of independence of board? Yes it does, yourlordship. This isn't the case under companies Act Sundaram replied.

The main argument of Mr. Sundaram rested on the aspect of interference in the functioning of the Board of Directors by other shareholders. The role of shareholders cannot be to run the affairs of the company. Mr. Sundaram then referred to the affidavit filed on behalf of Mr. Ratan Tata wherein he had stated that Tata Sons Group is a Company managed by the Board of Directors and it does not believe in running under family roots. According to the affidavit, the Trustees of Tata Groups operate in the interest and welfare of the Company and this role is not conferred to anyone solely because of the reason that he belongs to the Tata family.

This suggests that this is not a family run Company, your lordship. Such conduct takes away the whole purpose of Tata Sons and Companies Act, 2013. Sundaram argued. Yesterday, there was a discussion between Mr. Sundaram and the bench wherein CJI SA Bobde remarked the issue of family arrangement between traditional Indian Companies as Pater Familias.

Today, CJI asked Mr. Sundaram to refer to another relevant doctrine patria protestas which might be well suited in the present case to which Sundaram replied I am a legitimate son in the case, your lords. Even prior to 1985 when SPG group took shares in Tata group, the relationship of trust with the company existed. After amendment of 2013 Companies Act, SP group was on boarded with Tata Sons. It was the SP group that had voting rights and was acting in the interest of Tata Sons.

On the argument of a quasi partnership, Mr. Sundaram relied on the judgment of Sangramsingh P. Gaekwad & Ors. Shantadevi P. Gaekwad when more than one family or several friends and relatives together form a company and there is no right as such agreed upon for active participation of members were sought to be excluded from management, the principles of dissolution of partnership cannot be liberally invoked.» He argued that a pre existing partnership is not a requirement of quasi partnership. In January 1965 less than a month after Tata trust was deprived of voting rights, SP group had then held 64% rights. Mistry's earlier family also served and worked with the family.

While discussing the relationship between the TATAs and family of Cyrus Mistry, the bench asked Mr. Sundaram to clarify their position with respect to the issue of reinstatement of Mistry as Executive Chairman. We are not seeking pre appointment of Cyrus Mistry. In fact, Mistry never said that he now wants to become a chairman again. That is not the prayer here. Sundaram argued.

This was a board managed company. We want to get some kind of representation in the company to end the prejudice. Mr. Sundaram also argued on the shift of Tata Sons from being a Public Company to a Private Company. 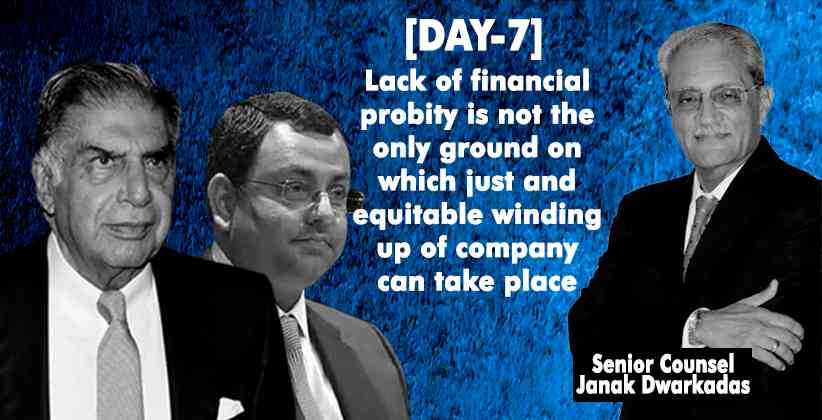 Business Dec 21, 2020 Akanksha, Intern Aquilas Legal Solutio ( Editor: Ekta Joshi ) 5 Shares
5 Shares
Senior Counsel Shyam Divan commenced his arguments stating that the proposal going around for pre-consultation was contrary to what is provided under the Companies Act, 2013 under which directors should act independently. He even traced various letters, emails and what transpired in board meeting which eventually led to Mistry's removal as executive chairperson. THREE SECTIONS OF COMPANIES ACT, 2013 HAVE BEEN BREACHED: DIVANDivan further added that the statutory provisions of...
Read full post 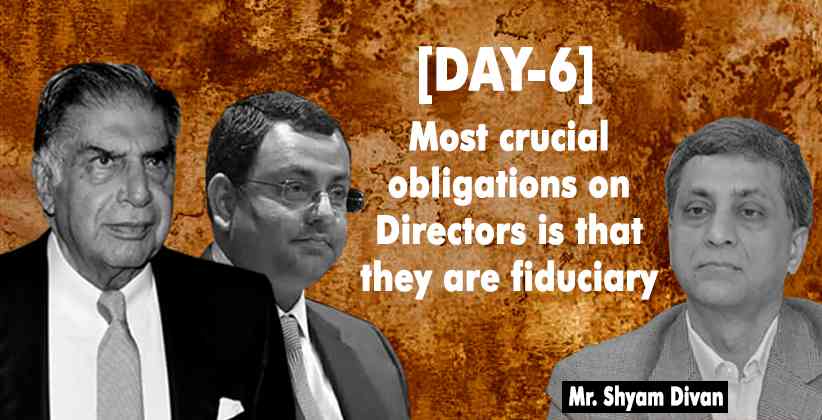 Business Dec 21, 2020 Akanksha, Intern Aquilas Legal Solutio ( Editor: Ekta Joshi ) 19 Shares
19 Shares
On the Day 6 of court battle between Tata Sons and Cyrus Mistry, Mr. Shyam Divan on behalf of Cyrus Mistry tendered his arguments on three main points : first, importance of Corporate Governance;  second, provisions of AoA and third, the history of relationship between Tata Sons and Cyrus Mistry. On the argument of Corporate Governance, Mr. Divan started by submitting that the present case in essence is about corporate governance.“Law has evolved from corporate majority to...
Read full post