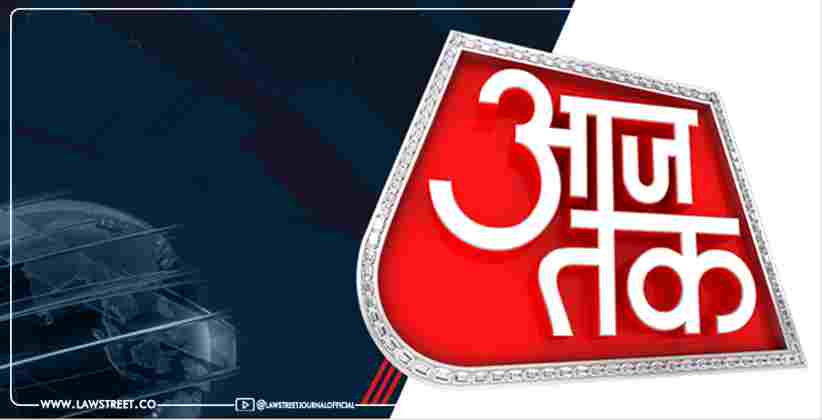 The Delhi High Court, observing that the reputation and goodwill in the name and mark 'AAJ TAK' is well established, passed an order in favour of the news channel in a trademark infringement suit that it had filed against several entities.

Justice Pratibha M Singh passed the order as ‘John Doe’ since the owner of the impugned domain name was anonymous.

The suit was filed by Living Media India Limited which had registered the mark 'AAJ TAK'. Living Media India contented that 'AAJ TAK' was a well-known name being extensively used on social media. The Plaintiff (LMI) had created various accounts, profiles and handles on social media and content sharing platforms such as Facebook, Twitter, YouTube, and Instagram etc. having an enormous outreach. The plaintiff submitted that various other known and unknown parties had started using its trademark 'AAJ TAK' on online platforms including Facebook, Twitter, and Instagram.

The plaintiff submitted that many amongst these channels had been using infringing marks while many were adding 'TAK' as suffix. The plaintiff opined that such arbitrary and indiscriminate use of 'AAJ TAK' mark by other online stakeholders was totally unlawful.

Defendant Nos.1 to 30 mentioned in the suit, were anonymous websites, YouTube channels, social media pages, social media handles, and social media accounts which were violating the registered marks of the Plaintiffs in some way or the other.

Counsels for Twitter and Google had argued that they were only intermediaries and they shall only take any action subsequent to an order being passed by the Court.

Rule 3(1) (d) of the Information Technology (Intermediary Guidelines and Digital Media Ethics Code) Rules, 2021, was highlighted in the said regard.

Living Media India added that there were a large number of infringing posts/profiles/accounts operating like this, and injunction was sought against them.

Thus, the Court was prima facie convinced that a case was made out for grant of an ad-interim injunction against some of the Defendants. "Most of the offending names and logos used are infringing in nature. Thus, barring the name 'Sach Tak', all the remaining infringing profiles, accounts, videos, channels are liable to be taken down as they are either using identical or deceptively similar names including logos and writing styles which is a colourable imitation of the Plaintiffs' Aaj Tak logo," the Court said.

“In the case of a deceptive logo or a different mark with either the word 'AAJ' or 'TAK' being contained in the mark, the social media platform shall take down the said page/video/post within a period of 36 working hours as per Information Technology (Intermediary Guidelines and Digital Media Ethics Code) Rules, 2021. In the case of pages/videos/posts where the platforms do not take it down, within 36 hours, intimation shall be given to the Plaintiffs, upon which the Plaintiffs are free to avail of their remedies in accordance with law. Thereafter, upon an order being passed by the Court of competent jurisdiction, the said platform shall abide by the orders, if any, passed”.

The hearing for the main suit has been listed for 3rd August, 2022.

The Court has also issued summons to the Defendants with a direction to file a written statement within 30 days, along with an affidavit of admission/ denial of the documents presented by the Plaintiff, failing which no Written Statement shall be recorded.

What is a John Doe Order?

The origin of ‘John Doe’ dates back to England’s King Edward III and such orders were issued to unidentifiable defendant.  Oxford Dictionary defined John Doe as “Anonymous Party”.

In the wake of LPG i.e. Liberalisation, Privatisation and Globalisation, the intellectual property has been termed as the most important asset in today’s world. In cases of multiple unknown parties involved in a case or dispute (also whereas identities are not traceable), they are collectively called as John Doe. In other words, Doe name is used to identify the anonymous or an unknown defendant.

It may be anyone be it an individual, company, partnership, association of person, a body of individuals, trust, society, service providers, website owners, newspaper owners which infringe intellectual property rights by making certain steps with such intent.

In India, Order 30 Rule 1 of the Code of Civil Procedure, 1908, entails that where a petitioner has likelihood of happening of some infringement of copyrights by using the information created by petitioner or has clues of having his works copied to achieve some financial gains may approach the court and seek John Doe order.  Also, the Court has been empowered under Order 39 Rule 1 and 2 of the Code of Civil Procedure, 1908 whereby the court can issue an injunction order to issue John Doe order.