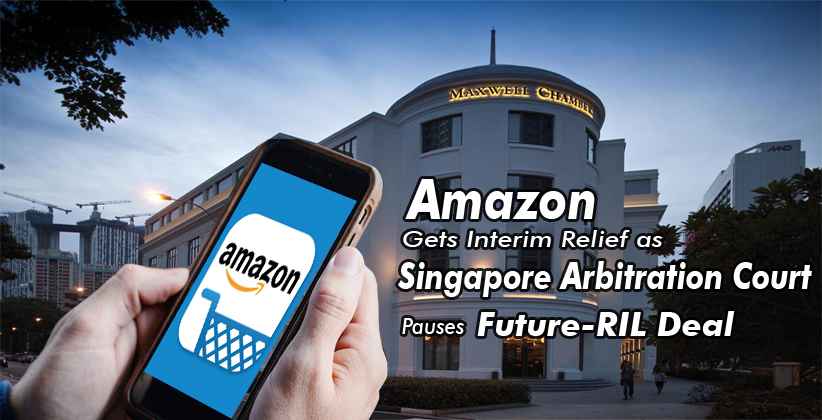 The USA based e-commerce giant Amazon claimed that Future Group had violated an investment contract it had agreed to sell its retail assets to Reliance Retail Ventures Ltd (RRVL) which was clearly against the contract.

This case was heard by a single judge bench consisting of Justice V.K.Rajah. Future Retail was barred by the court from taking any step to dispose of or encumber its assets or issuing any securities to secure any funding from a restricted party. In the order by the court, Justice V.K.Rajah said that the parties will have to wait for further orders from the tribunal when constituted.

The court order stated the following:

This court order gives Amazon a relief as a Future-Reliance deal could impose serious competition to the online retailer and Amazon who has a strong online presence has been trying for a long time to build its presence in the offline retail space to complement the successful online business.

A spokesperson from Amazon said, “We welcome the award of the emergency arbitrator. We remain committed to an expeditious conclusion of the arbitration process.”

Late Sunday (25th October 2020), Reliance Retail in a statement said that RRVL had entered into the transaction for the acquisition of assets and business of Future Retail Ltd under proper legal advice and the rights and obligations were fully enforceable under the Indian law. It also added that RRVL intended to enforce its rights and complete the transaction in terms of the scheme and agreement with the Future group as soon as possible without any delay.

However, a senior advocate from the Supreme Court said that it would be difficult for Future Group to successfully challenge the order given by the court.

It was reported that Amazon was open to help the Future Group bring in a new, financially strong partner or investors if the deal between Reliance Retail Ventures Ltd is called off.