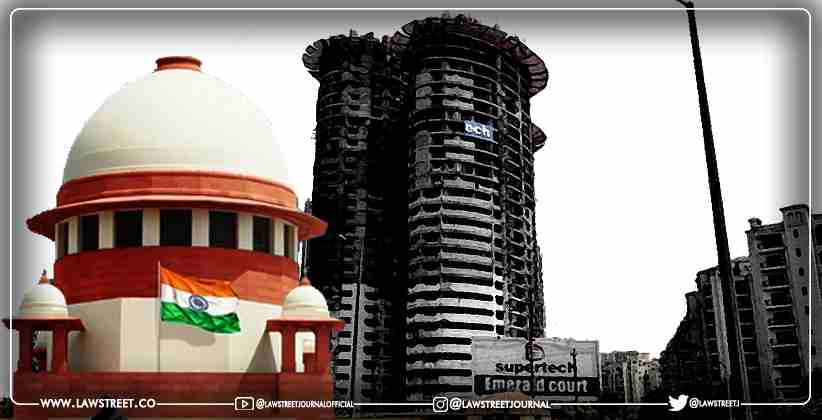 Recently, Supertech petitioned the Supreme Court to stay the court-ordered demolition of two 40-story towers at its Emerald Court housing project in Noida, claiming that it has an alternative plan that could save several crores of rupees and be “beneficial to the environment.”

In its application for a stay order, Supertech claims that partial demolition of 224 flats from the ground floor to the 32nd floor of one of the two towers, as well as the community area on the ground floor, will be sufficient to bring the structure into compliance with all building codes. It claimed that if the court accepted the new proposal, it would adhere to fire safety and other municipal norms in a timely manner.

“The applicant submits that, due to the proximity of T-17 to the other towers, the applicant cannot demolish the building by blowing through explosives, and that the same would have to be done brick by brick,” stated Supertech's new application, which has yet to be heard by the court.

R K Arora, the chairman of Supertech Group, confirmed the filing of the application in court. “At this time, we do not wish to comment further on the matter,” he stated.

On August 31,2021, a bench led by Justice Dhananjaya Y Chandrachud ordered the demolition due to grave violations of building codes, which the court said were the result of “nefarious complicity” between the Noida Authority and the real estate developer.

It ordered that Supertech carry out the demolition on its own dime and complete it within three months, under the supervision of the Noida Authority and an expert body such as the Central Building Research Institute.

Furthermore, the court ordered Supertech to refund money to all existing home buyers in Emerald Court's Apex and Ceyane towers within two months, plus interest at the rate of 12% per annum from the date of their deposits. In addition, the developer must pay $2 million to the Emerald Court Owner Resident Welfare Association (RWA), which led the legal fight against the twin towers' construction on a green space and in violation of minimum distance standards.

The two towers slated for demolition have 915 flats, 633 of which have been reserved. 252 flat buyers remain, as 133 have re-invested in other Supertech projects and 248 have received refunds.

Supertech has now proposed partial demolition of one of the towers (T-17), claiming that this would help maintain the prescribed minimum distance of 16 metres between the two towers in terms of both height and length of the building — a lack of which was cited by the court as a primary reason for ordering the demolition.

According to the application, Supertech will provide a landscape green area on the demolished portion of T-17, giving residents a larger green area than was originally planned in 2006.

Furthermore, the plea stated that flat owners who wish to keep their flats would be assigned apartments in the revised T-17 building.

It also stated that the proposed change will be beneficial to the environment because demolition would generate a large amount of debris that would have to be disposed of at an already overburdened landfill site. “The same will add to the existing environmental issues that the said landfill sites are already facing, thus increasing the existing carbon footprint,” stated Supertech.

The Supreme Court's decision on August 31, 20221, was based on a slew of petitions filed by home buyers in support of and in opposition to the Allahabad high court's 2014 decision. The high court ordered the demolition of the two buildings within four months and the refund of money to apartment buyers on April 11, 2014. After the firm filed an appeal, the Supreme Court stayed the judgement.

In its decision, the Supreme Court chastised the Noida Authority for collaborating with the builder to carry out illegal construction in violation of municipal and fire safety regulations. It claimed that the Authority's sanction plan approved in 2009 was illegal because it violated the minimum distance criteria.

The Supreme Court ruled that the plan could not have been approved even if the home buyers had consented. It also instructed the authority to take action against the officials who were complicit with Supertech. 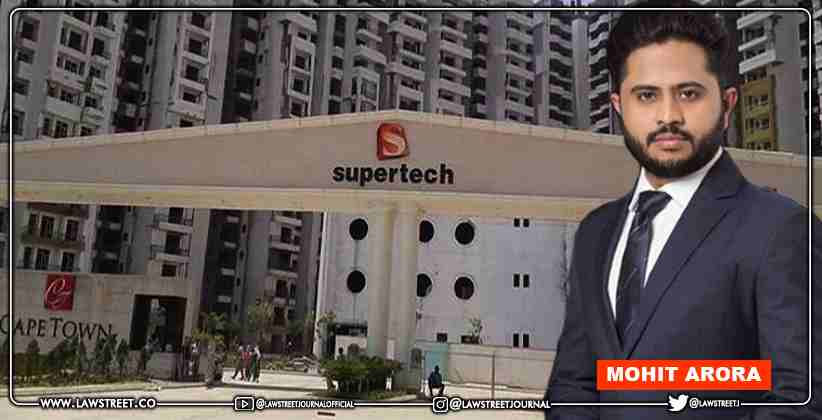 Business Sep 28, 2021 Nargis Bano ( Editor: Ekta Joshi ) 15 Shares
15 Shares
The Delhi High Court has granted Super tech the right to challenge a consumer court order that issued an arrest warrant for its Managing Director Mohit Arora in connection with a homebuyer's case.The arrest warrant was issued on September 20, 2021, by the National Consumer Disputes Redressal Commission (NCDRC), which had earlier on September 13,2021, rejected Supertech's request for a twelve-month payment plan for the decretal amount owed to the homebuyer.Justice Amit Bansal granted the company...
Read full post