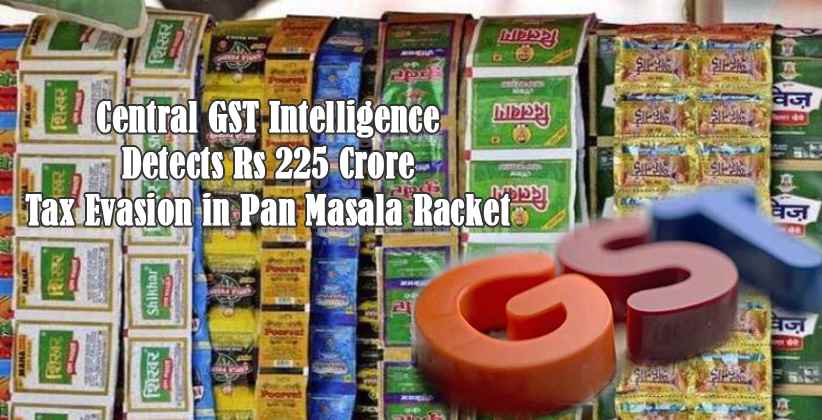 It was estimated, based on GST Intelligence Directorate-General DGGI's preliminary investigations, that the accused persons and their associates evaded GST of around Rs 225 crores on the products sold illegally during the period between July 2019 to March 2020.

The cumulative implication of duty in this fraud is estimated at Rs 400 crore, the DGGI statement noted.

Also, during the emerging months (April & May 2020) of the lockdown, the suspects are expected to have resorted to large-scale illegal selling and supply of pan masala/tobacco, the statement recorded, adding that further investigation was pending in this matter.

The statement further clarified that organizers and masterminds also made an unsuccessful attempt to threaten enforcement officials by involving a mob of around 20-30 people during a residential search and later on Thursday, 11th June 2020, and Friday, 12th June 2020, at the factory premises.

However, both attempts to disrupt government function were effectively thwarted by DGGI enforcement officers with timely and professional assistance from Madhya Pradesh Police, who was always a part of the entire search operations, the statement said.

Three accused persons were arrested on Friday, 12th June 2020, it said, despite the serious offenses committed.

According to the DGGI investigations, the masterminds of this fraud set up eight companies in the real estate, hospitality, and media sectors to launder the illicit wealth generated from these companies.

For the last several years, the accused persons are thought to have used more than 70 freight trucks to orchestrate this GST scam.

The cargo trucks were found to be carrying On Press Duty display in Madhya Pradesh and neighboring states for ferrying the illicit consignments of pan masala/tobacco and their raw materials. The drivers had been found to bear local Indore newspaper identification cards, the statement said.

The DGGI had recently identified an annual evasion of Rs 18.77 crore by GST and confiscated illegal goods and Rs 2.92 crore worth of cash. This had resulted in the arrest of one national residing in Indore, Pakistan.

The operation was named 'Kark' — considering the high loss of Goods and Services Tax (Kar in Hindi) and the reported adverse effects of consuming illicit tobacco not subject to food and safety standards leading to a high prevalence of oral cancer (Kark) in India, the statement said.

In addition to Indore and Ujjain, uncounted finished goods (branded pan masala and tobacco) and primary raw materials such as betel nuts, raw tobacco, essence and packing material were seized from undeclared premises in large quantities during the search operation which was also carried out in Jabalpur and Bhopal, the statement issued by the Additional Director General, DGGI, Bhopal, stated.

The officers who carried out raids in Indore and Ujjain, which are the worst coronavirus-affected areas of the state, followed the requisite procedure of social distancing and wore gloves, masks, and other protective equipment, the agency said.

To avoid detection, the masterminds and organizers of this fraud had floated the partnership/ proprietorship/HUF firms engaged in manufacturing and trading of pan masala and tobacco owned on paper by three dummy persons. These three dummy persons had actively colluded and knowingly participated in the GST fraud, it said.

Certain fraud masterminds and financial beneficiaries did not join the investigations, the DGGI said.

They have been summoned for tendering statements by the central GST intelligence department under the provisions of the Central GST Act, 2017, the probing agency said.

Because of the pandemic-induced lockdown on 25th March 2020, considering its danger of spreading Covid-19 infection, selling and distribution of pan masala and chewing tobacco had been banned across India.

This identification and evidence gathered by DGGI suggest that, sadly, certain unscrupulous suppliers, dealers, may have taken unfair advantage of this emergent situation. The market information indicates that during the lockdown, these prohibited products were being sold and consumed at 4-5 times their normal market rates in some places within Madhya Pradesh and Maharashtra.