Home Business To attach or not: IBC vs. PMLA, tussle between insolvency proceedings and ED’s powers
Business

To attach or not: IBC vs. PMLA, tussle between insolvency proceedings and ED’s powers 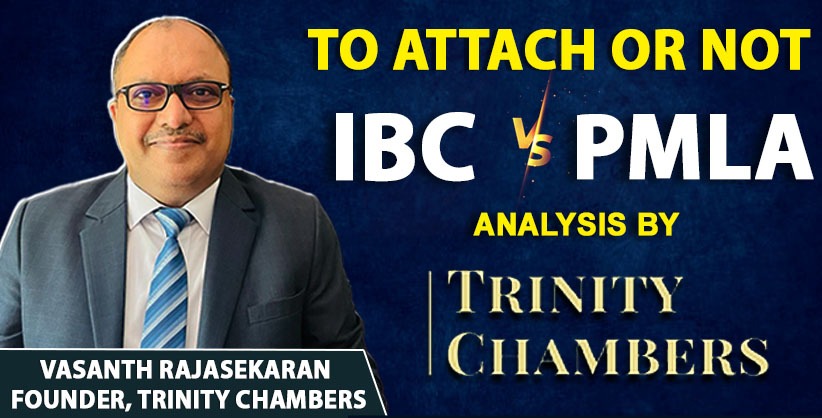 A recent Delhi High Court decision and a matter before the Supreme Court have stirred the debate on the powers of Enforcement Directorate to attach assets of companies undergoing insolvency proceedings.

The Delhi High Court recently held, in Rajiv Chakraborty v. Directorate of Enforcement (ED) that the ED is empowered under the Prevention of Money Laundering Act, 2002 (PMLA), to attach a corporate debtor's assets that are believed to be 'proceeds of crime' until the embargo under Section 32A of the Insolvency and Bankruptcy Code (IBC) is triggered. The decision has brought into focus the never-ending debate as to which of the two laws - IBC and PMLA - prevails over the other.

There is a divergence of opinion as regards the effect of IBC proceedings on the powers of ED to attach assets. On one end, it is contended that the IBC would have an overriding effect by virtue of the non-obstante provision in Section 238 of the IBC. Even otherwise, Section 14 of IBC prohibits the continuation and institution of civil proceedings against the corporate debtor once the corporate insolvency resolution process (CIRP) has begun. Similarly, Section 32A of the IBC protects the corporate debtor's assets from attachment once the resolution plan is approved or when a measure towards liquidation is adopted. As per proponents of the supremacy of IBC, the net result of the non-obstante clause, the moratorium under Section 14 coupled with Section 32A, is that the ED would not be empowered to attach the corporate debtor's assets during the pendency of insolvency proceedings against the corporate debtor.

On the other hand, there is also widespread support for the proposition that the initiation of insolvency proceedings would not affect ED's powers to attach tainted assets of the corporate debtor. In Rajiv Chakraborty, it was argued by ED that the proceeds of crime stood on a different pedestal compared to other laws. The attachment and confiscation related actions of ED are aimed at taking away from a person or an entity what has been illegitimately secured by indulging in criminal activity. Experts opine that the provisions of IBC should not be allowed to be used as an "amnesty route" for the accused under PMLA. As regards the bar under Section 32A, the ED, while arguing in Rajiv Chakraborty, submitted before the Delhi High Court that the embargo would trigger only upon the approval of a resolution plan or enforcement of liquidation.

In Varrasana Ispat Ltd. v. Deputy Director of Enforcement, while dealing with the question of the interplay of IBC and PMLA, the NCLAT opined that the PMLA related to proceeds of crime and offence of money laundering. Thus, Section 14 of the IBC would not apply to proceedings initiated under the PMLA. In a similar decision in Andhra Bank v. Sterling Biotech Ltd., the NCLAT observed that it is always open to ED to seize assets of the corporate debtor if the same are based on proceeds of crime. The decision in Sterling Biotech Ltd. was further reiterated in Rotomac Global Pvt. Ltd. v. Deputy Director of Enforcement. The only decision supporting the supremacy of IBC was rendered in Directorate of Enforcement v. Manoj Kumar Agarwal which held that it would be impermissible for authorities under PMLA to exercise the power of attachment after the moratorium under Section 14 came into effect. To settle the controversy, a larger bench of NCLAT in Kiran Shah v. ED, rendering a decision diametrically opposite to Manoj Kumar Agarwal, held that Section 14 of the IBC does not pose a hindrance for ED officials to exercise their powers under the PMLA.

As regards the scope of Section 32A, the Delhi High Court in Rajiv Chakraborty observed that Section 32A has the effect of shutting out PMLA proceedings only in two trigger cases. First, when the resolution plan is approved and second, when a measure in aid of liquidation is adopted. The Delhi High Court further observed that the power of attachment had sufficient checks and balances under the PMLA. Even otherwise, the attachment of the corporate debtor's assets only enables the ED to restrain any further transactions or private alienation of such assets. Attachment, thus, is not to be viewed as a removal of rights that may exist in respect of the corporate debtor's assets.

Challenge before the Supreme Court

The matter relating to the effect of insolvency proceedings over the powers of ED to attach assets of corporate debtor appears to have not been brought to closure as yet. The Supreme Court has recently issued notice in a matter in Ashok Kumar Sarawagi v. ED, which seeks to challenge the decision of the NCLAT in Varrasana Ispat and Kiran Shah. Hence, it needs to be seen how the Apex Court brings the matter to rest and crystallises the legal position.

[This article was first published in Business Line on Dec 05, 2022]

The writer is the founder and head of Trinity Chambers, Delhi.