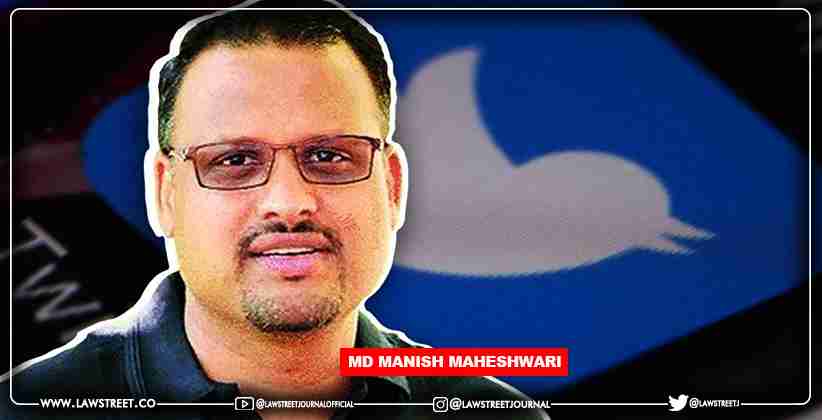 On Thursday (June 24th, 2021) the Karnataka High Court ordered the Uttar Pradesh police not to take coercive action against Manish Maheshwari, Managing Director of Twitter Communications India Private Ltd (TCIPL), in response to the notice issued to him under Section 41A of the Code of Criminal Procedure in the Ghaziabad FIR.

The UP Police have summoned the Twitter employee to the Loni Border Police Station in connection with the Ghaziabad video inquiry. The interim order was issued by a single bench of Justice G Narender in a writ petition filed by Maheshwari under Article 226 of the Indian Constitution, challenging the UP Police notice. "Prima facie, the petitioner is anticipating deprivation of liberty," the bench stated orally. "An interim order will be issued restraining the respondents from taking any coercive action against the petitioner," the bench stated in the order.

Meanwhile, if the police want to question the petitioner, they can do so virtually, according to the High Court. On Monday (June 28, 2021) the Court will hear the case again.

Senior Advocate Nagesh argued that, as a mere employee of Twitter Communications India Pvt Ltd, the petitioner had no role in the distribution of the videos. It was claimed that the petitioner was not a member of the company's board of directors and was only the revenue head in charge of advertising sales. Although he was given the title of 'Managing Director,' this is not in accordance with Section 2(54) of the Companies Act 2013. He told the bench that the UP Police first summoned Maheshwari to appear as a witness under Section 160 of the CrPC.

Maheshwari responded to the notice by stating that he was unable to travel to Ghaziabad from Bangalore and requested that the statement be recorded online. Later, a notice under Section 41A CrPC was served on him, threatening arrest if he did not appear at the Loni Police Station in Ghaziabad. "Twitter is not under my control or administration. Twitter Communications India Pvt Ltd is the name of the company. What exactly am I? A worker "Nagesh submitted his work. According to Nagesh, the Supreme Court allowed online recording of statements in the Vinod Dua case.

Respondent questions the viability of the writ petition

The respondent's counsel, Advocate Prasanna, objected to the writ petition's maintainability, citing a lack of territorial jurisdiction. He contended that simply serving a notice at a location does not confer jurisdiction there for the purposes of Article 226(2) of the Constitution. Nagesh interrupted at this point, stating that anticipatory bail is not available in Uttar Pradesh because Section 438 CrPC does not apply there. The bench stated that the question of maintainability can be decided later; however, because the petitioner is facing arrest in Bangalore, the issue of interim relief must be considered. "At the very least, you must demonstrate that he is responsible for the material posted or that wing," the bench stated. According to Advocate Prasanna, the relevant materials will be produced before the bench.

The FIR was filed in response to tweets by a few journalists and politicians about an elderly Muslim man being assaulted near Ghaziabad. According to the FIR, false information about the attack was spread on Twitter, and the attack was communal in nature. The FIR was filed in response to an elderly Muslim man's claim in a video that his beard was severed and he was forced to chant "Vande Mataram" and "Jai Shri Ram." However, the Uttar Pradesh Police later ruled out any "communal angle" and stated that the elderly man, Sufi Abdul Samad, was attacked by six men who were dissatisfied with the tabeez (amulets) he had sold them. It lists offences punishable under the Indian Penal Code's Sections 153 (inciting riots), 153A (promoting religious hatred), 295A (insulting religious beliefs), 505 (statements encouraging public mischief), and 120B (punishment of criminal conspiracy). Earlier this week, the High Court issued notice on a transit anticipatory bail application filed by Mohammed Zubair, co-founder of the fact-checking portal 'AltNews,' seeking protection in the FIR. The UP Police stated in the Section 41A notice served on Zubari that they had no intention of arresting him.

On Monday (June 21, 2021) another person identified in the FIR, journalist Rana Ayyub, was granted 4-week transit anticipatory release by the Bombay High Court.

'Are you willing to put student’s lives in danger?' Supreme Court warns the government of Andhra Pradesh not to hold Class XII exams in the face of COVID