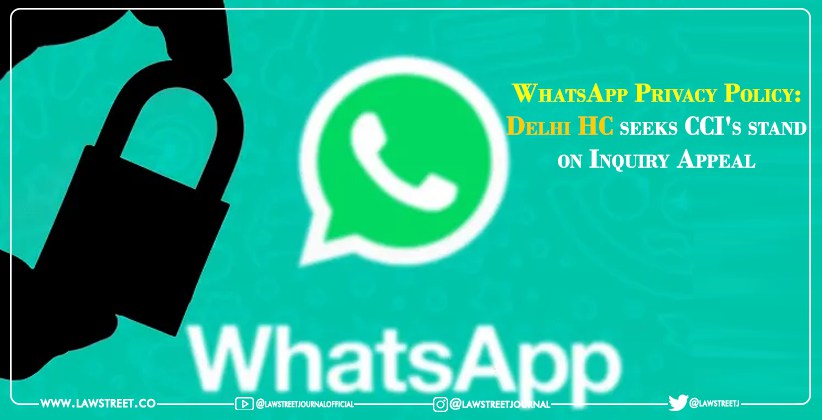 The Delhi High Court on Thursday (May 6,2021) directed the Competition Commission of India to respond to Facebook and WhatsApp's appeals against a single judge's decision rejecting their appeals against the CCI's investigation into the instant messaging app's current privacy policy.

The CCI, which had directed the inquiry, was served with notice by a bench of Chief Justice D N Patel and Justice Jasmeet Singh, who asked for a report by May 21, the next date of hearing. Though it would have been "prudent" for the CCI to wait for the results of pleas in the Supreme Court and the Delhi High Court challenging WhatsApp's latest privacy policy, the single judge said on April 22 that doing so would not make the regulator's order "perverse" or "wanting of jurisdiction."

The court had ruled that the appeals filed by Facebook and WhatsApp to stop the CCI's investigation had little validity. The CCI had argued before the single judge that it was not looking at the supposed breach of individuals' privacy that the Supreme Court was looking at.

It had claimed in court that WhatsApp's current privacy policies would lead to improper data gathering and "stalking" of customers for targeted ads in order to attract more users, and therefore constitutes a suspected violation of dominant status.

"There is no question of jurisdictional error," it had contended saying that WhatsApp and Facebook's pleas challenging its decision were "incompetent and misconceived". WhatsApp and Facebook had challenged the CCI's March 24 order directing a probe into the new privacy policy.

CCI also advised the court that it would be unable to decide whether WhatsApp's data gathering and distribution with Facebook constituted an anti-competitive activity or an abuse of superior power before the investigation was completed.

It also said that the information gathered, which included an individual's location, the type of device they were using, their Internet service provider, and whom they were speaking with, would lead to the development of a consumer profile and preference that would be monetised by targeted ads, and that all of this amounted to "stalking."

On the basis of news coverage, the CCI had agreed to investigate WhatsApp's latest privacy policies on its own in January this year.

'Can’t allow court to become ground of recrimination between Centre and Delhi': Supreme Court over question of oxygen supply to the national capital