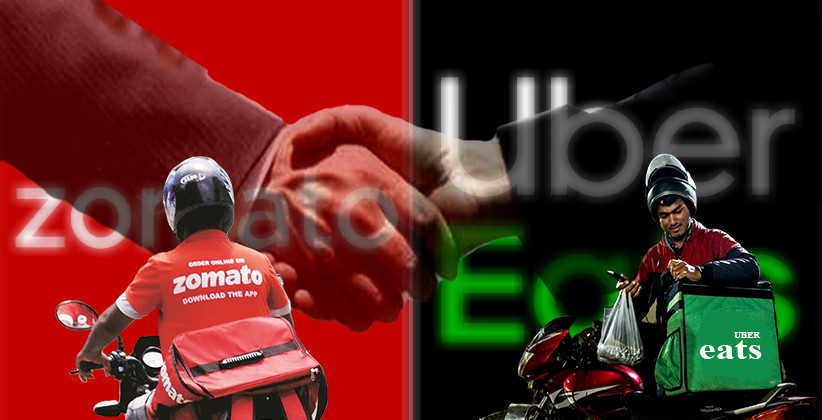 Well-known food delivery company, Zomato has acquired Uber Eats India by Uber Technologies. Uber Eats was incurring losses because of the failure of its food delivery business globally. Zomato has confirmed the transaction of sale that happened between the two on a blogspot today (January 21, 2020). Zomato is the leader in the food business market currently having a net worth of $2.2 billion dollars.

New York Times has reported that Uber will be getting a 9.9% share in Zomato’s stock, in exchange for its food business thereby maintaining a foothold in the online food business arena. Neither of the companies have divulged information about the valuation of the deal but reports suggest that it accounts for around $300-$350 million.

This transaction has marked yet another achievement in the ongoing wave of consolidation. Uber’s goal is to become profitable as per the EBITDA profitability margin by 2021 as a ride-hailing giant in the world with only one other significant competitor – Ola. Stepping out of the food business is just another move towards achieving that goal.

The EBITDA margin measures a company's earnings before interest, tax, depreciation, and amortization as a percentage of the company's total revenue. This margin is considered to be the best indicator of a company’s financial health since it does not take into account a company’s accounting or tax decisions. It calculated the total amount of cash profits that a company is making within a year.

Uber had begun its food delivery career in India in 2017 but has failed to successfully compete with Bangalore-based market leaders like Swiggy and Zomato showing signs of amalgamation which are backed by Jack Ma’s Ant Financial. Uber’s ride-hailing competitor Ola had acquired the food delivery giant Foodpanda in December 2017.

Uber Eats’ more than 25,000 restaurants registered on its application from 41 cities of India would move to Zomato’s database starting today.

Founder of Zomato, Deepinder Goyal said, “The competition in this space is going to continue to be intense, and the food delivery category is still very small compared to the overall food service market in India. Through this deal, Uber Eats India users now become Zomato users. I want to assure Uber Eats India users that their user experience won’t be compromised in any way – if at all, the scale gives us higher density to make our deliveries faster.”