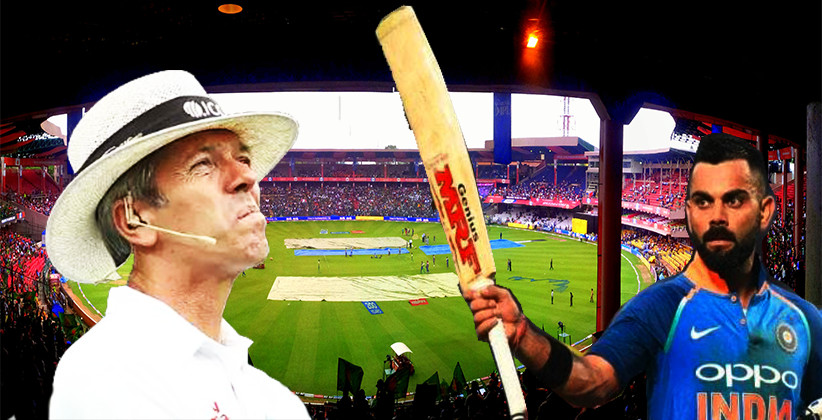 After an altercation with Royal Challengers Bangalore skipper Virat Kohli and pacer Umesh Yadav, English umpire Nigel Llong vented his anger by kicking the door of the umpires’ room at the M Chinnaswamy stadium, and ended up damaging it.

On May 4, 2019, during the match against Sunrisers Hyderabad, Llong signalled the penultimate ball of the 20th over as no-ball (for overstepping). However, television replays showed that Yadav's backfoot had landed behind the line.

Yadav walked up to the umpire to express his dissatisfaction but was admonished by Llong and asked to continue bowling. Kohli too expressed his displeasure over the umpire's call.

Llong, 50, an ICC Elite Panel umpire, was seen expressing his displeasure at the players' protests. According to eyewitnesses, at the end of Sunrisers' innings, Llong walked back to the pavilion and kicked the door to the umpires' room in anger, damaging it in the process.

As per reports, Llong, on his part, spoke to the Karnataka State Cricket Association (KSCA) officials and paid Rs 5,000 to the state association as compensation for the damage.

KSCA has decided to report the incident to the Committee of Administrators (COA).

"It was an unfortunate incident. As a state association, we are dutybound to report it and we are writing to the COA today," confirmed KSCA secretary Sudhakar Rao.

In the match, Ulhas Gandhe was the other on-field umpire, while the third umpire was Anil Chaudhary.

‘LIFE ESTATE’ OR ‘LIFE INTEREST’ CREATED UNDER A WILL