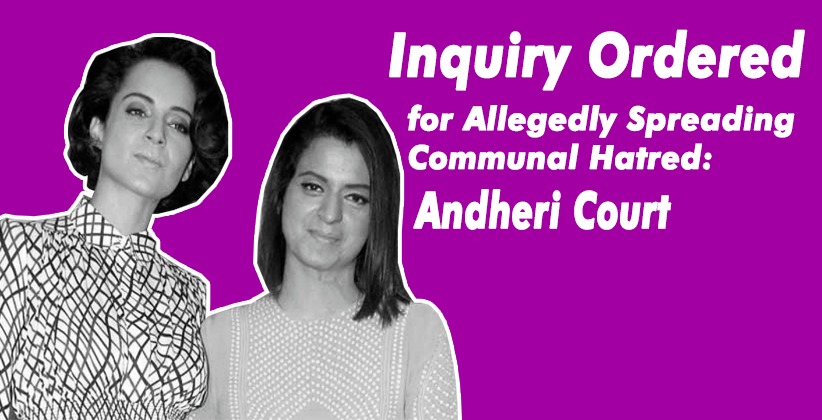 A magistrate court on Thursday (October 29, 2020) asked the Mumbai Police to begin an inquiry against Kangana Ranaut and her sister Rangoli Chandel for tweets allegedly defaming the members of the Tablighi Jamaat in Delhi. Reacting to the complaint filed by advocate Ali Kaashif Khan Deshmukh, the Andheri court said that the evidence involved in the case against the sisters is electronic, and therefore, the police need to conduct an inquiry first.

Earlier this year, Rangoli had shared a few tweets criticizing the members of the Tablighi Jamaat during the COVID-19 lockdown period. This led to the suspension of her Twitter account after which her sister, Kangana, released a video on her Twitter account defending Rangoli against those who accused her of spreading religious hatred online.

As reported by Mumbai Mirror, the court observed, "Allegations in the complaint are based on the comments of the accused on (a) social media platforms. Evidence against the accused appears to be of electronic nature. Therefore, inquiry at the hands of police is necessary for proceeding against (the) proposed accused. Such an inquiry will be helpful to know the roles of (the) accused.

The court added that the alleged video and the tweets are no longer available on record and therefore, a professional inquiry is a must. Deshmukh had earlier tried to file a complaint in the same case at the Amboli police station. However, he said that the police didn't take any action then.

Meanwhile, another magistrate court in Bandra has ordered the police to register an FIR against the two sisters on the basis of a complaint filed by the casting director and fitness trainer Munnawarali Sayyed who has accused them of sedition and 'trying to create hatred and communal tension between Hindus and Muslims' through their statements and tweets. The complaint mentions Kangana's infamous 'PoK' tweet and a few statements made in relation to the Sushant Singh Rajput death case.