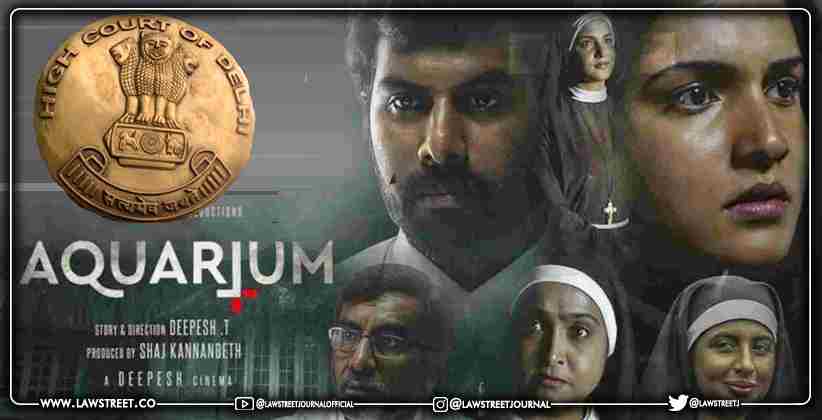 On Monday ( May 17, 2021), the Delhi High Court directed the authorities concerned to decide on the representation of the petitioner made to the Secretary of Ministry of Information and Broadcasting to stop the release of the malayalam movie "aquarium". The plea states that the movie is "blasphemous" in nature and would hurt the religious sentiments of the christian community.

The petitioner, Jessy Mani, a catholic nun and a psychologist by profession had opposed the release of the film because it allegedly "depicts the sexual relationship of nuns with two priests" and an "emotional relationship with Jesus Christ". The plea had sought steps to be taken by the Union of India and Saina Infotainments Pvt Ltd which runs the OTT platform "Saina Play".

Jessy mani stated that "there are scenes of sexual relationships among same-sex, between priests and nuns and sex with animals, which is a highly derogatory manner, end up tarnishing the reputation of the Catholic Church and its members. The overall effect is alleged to be "demoralizing of the members who joined in the priestly order and nunship."

The film directed by T Deepesh was originally made in 2014 but got tangled in censor issues. The film then titled ‘Pithavum Puthranum’ was not allowed for public exhibition. The reason stated by the CBFC was that the subject was likely to hurt the religious sentiments of the Christian community.  'Pithavinum Puthranum Parisudhathmavinum' meaning " (Father, Son, and holy spirit") had the word Parisudhathmavinum deleted later by the producers to remain non-controversial. The film is set in a convent in a scenic high range. Two of the inmates, Sister Elsitta and Sister Jaseentha, perceive Jesus Christ in two ideological extremes. The abrasion of fantasy and reality augments the contention between them. Honey Rose and Rajshri Ponnappa play the two lead roles. The cast also includes Sunny Wayne and V K Prakash.

"In view of this limited submissions, we direct the concerned respondent Authorities to decide the representation dated 8th May 2021 (Annexure P-4) preferred by the petitioner, in accordance with law, rules, regulations and Governmental policies applicable to the facts of the case, as early as possible and practicable."

The Kerala High Court stayed for two weeks all further proceedings based on the certification given to the Malayalam film 'Aquarium' by the Central Board of Film Certification. The court issued the order based on a petition filed by two Catholic nuns Sr Josia and Sr Mary KG, Ernakulam alleging that the theme offends the religious sentiments of Christians as a whole and nuns and priests in particular.

Many protests were made against the OTT release of this movie, especially among the Christian missionaries. Also it was stated that it caused a violation of the fundemental rights of Christians.