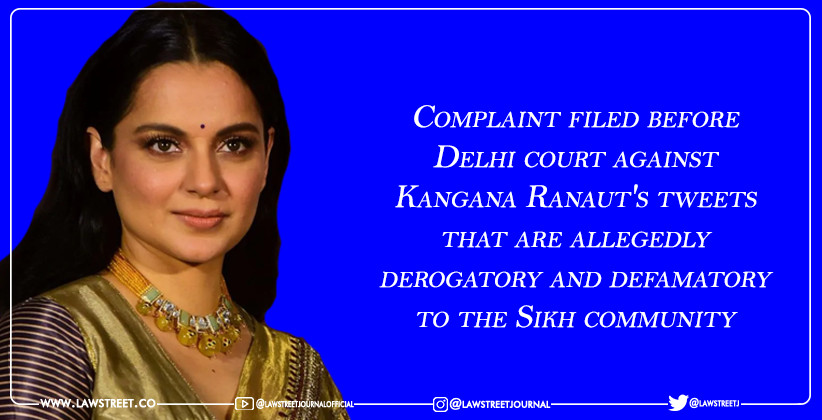 The Delhi Court on Wednesday, March 10, 2021 sought action taken report (ATR) from the Delhi Police in a case filed by Manjinder Singh Sirsa, President Delhi Sikh Gurudwara Management Committee against Actress Kanagana Ranaut for her alleged "derogatory and defamatory hate tweets" on Farmers Protests thereby defaming the Sikh Community and committing acts prejudicial to national integrity, unity and peace of India. Metropolitan Magistrate Amardeep Kaur while further claimed that Ranaut made a series of tweets with an ulterior motive of defaming the Sikh community by promoting communal disharmony along with the farmers who are protesting against the recent Farm laws.

The complaint filed by Manjinder Singh Sirsa was dated 7th December 2020 at the North Avenue Police Station, New Delhi under sec. 153A (Promoting enmity between different groups), 153B (Imputations, assertions prejudicial to national-integration), 295A (Deliberate and malicious acts, intended to outrage religious feelings of any class by insulting its religion or religious beliefs) and 505(1)(b) (Statements conducing to public mischief) of the Indian Penal Code.

The tweet in question dated 5th December 2020 can be quoted as "Can Shaheen Bagh's Biryani gang and Khalistani terrorists tell what their problem is about the bill. Even at the time of the CAA it was said on behalf of the government that no one would lose citizenship, yet they rioted and killed hundreds of people."

It has been contended that the said tweets have attempted to manipulate and misuse the huge pool of social media following for oblique motives and vested interest for political mileage by defaming the peaceful protest and agitation by the farmers thereby causing an atmosphere of communal disharmony. That such an act is meant to create a divide in the society and is a clear example of "Hate Speech/Tweet" that needs to be addressed and explained before the fake, derogatory and imaginary tweet/ retweet on social media which may further cause prejudice to the farmers in their peaceful agitation and protest as ordained under the constitutional rights."

He argued that the complaint sought the registration of FIR for various offences including — promoting enmity between different groups on ground of religion, race, place of birth, language etc. and outraging religious feelings.