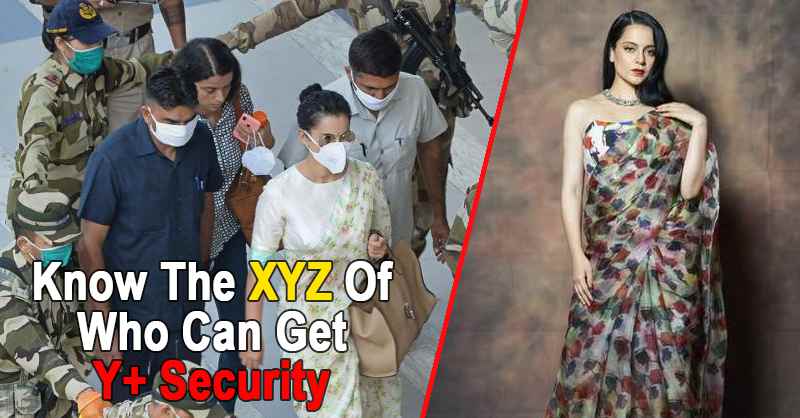 It is not uncommon for security to be provided to certain individuals who are at high-risk in India. The cover is provided by the police and the local government. India has a 4-tiered security blanket for different levels of threat. The level of this security allotted to a high-risk individual is majorly on the perception of the threat to the person.

Of late, the whole country is talking about the Y category of Security provided to actress Kangana Ranaut. The Y category of security consists of 11 personnel, which includes 1 or 2 commandos and police personnel. The Y security cover is the third rung of a complex multi-tiered security detail framework in India. Usually, the Y+ Security Cover is usually accorded to people who face a high level of threat.

Bollywood actress Kangana Ranaut has been promised a Y plus security government by the Narendra Modi Government. This was done in action to her claims that she feared the Mumbai Police. The ‘Queen’ starrer also went on to allege that there was a strong presence of drug nexus in Bollywood. These fears were also combined with her subsequent difficulties with the Maharashtra government as well as Shiv Sena.

This raised a question in everyone’s mind, will the Indian government bestow any individual fearing for their life with a Y + security cover? Unfortunately, this is not the case. This security detail is called VIP security and is only accorded to individuals of importance, either in the government or in civil society.

When such an eminent personality is accorded with a security cover, the MHA ascertains the level of security that will be provided to the high-risk individual. Thus, the MHA decides the level of security on a case-to-case basis. This is done in accordance with the inputs that are provided by intelligence agencies, including the Intelligence Bureau and Research and Analysis Wing

“The agencies mostly provide a subjective measure of the threat to life or injury to a person from terrorists or any other group, based on information generated from their sources. The information can include intercepts of phone conversations, human intelligence, or a credible analysis of an open threat”

Ms. Ranaut will now be under the watchful guard of elite commandos of the Central Reserve Police Force 24/7. In other words, a force of CRPF commandos will watch over her round the clock. This makes Kangana Ranaut the first Bollywood actor to be accorded this privilege. Only a few select people enjoy the Y + security cover in India. In addition to Ms. Ranaut, there are only 15 people in the entire country who are accorded with a Y + security cover. This exclusive group consists of select individuals like the Chief Justice of India, S.A. Bobde, and Union Minister Ravi Shankar Prasad.

The Bollywood Actress is currently in Himachal Pradesh, her native place. After the news of the Y _ Security Detail, she took to Twitter to thank the Modi Government, mentioning Home Minister Amit Shah personally. She tweeted, “This is proof that no fascist will be able to crush a patriotic voice, I am thankful to @AmitShah who, given the circumstances, could have advised me to visit Mumbai after a few days. However, he kept the honor of the words of a daughter of India and protected my self-respect and pride.”