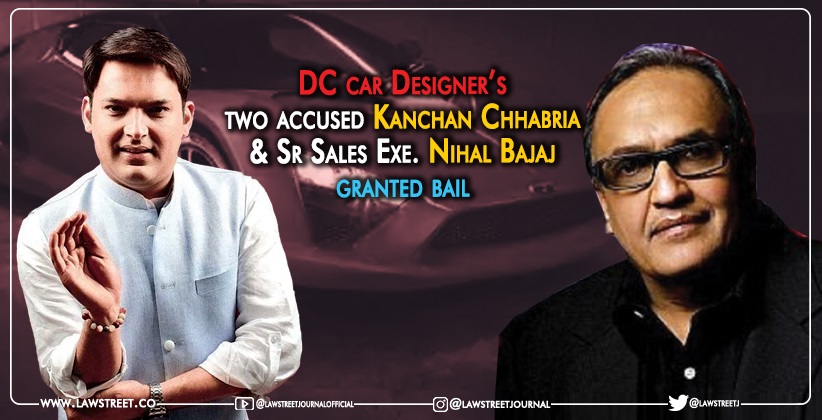 The applicants are high-level executives in the D. C. Design Pvt. Ltd. that manufactures designer cars at its facility in Pune. In 2017 Kapil Sharma has ordered a vanity car made by the company by paying a sum of Rs. 5.7 crores. But after multiple delays and paying the additional payment of Rs. 40 Lakhs demanded as GST Kapil Sharma approached the NCLT to freeze the accounts of the car manufacturer.  In retaliation, D. C. Designs demanded an additional payment of Rs. 12 Lakhs as parking charges for his car in the company premises. This forced Kapil Sharma to approach the Economic Offenses Wing (EOW) of Crime Investigation Unit (CIU) of the Mumbai police with a cheating case.

Dilip Chhabria was already under arrest at the time in fraud cases registered against him for duping several Non-Banking Financial Companies by availing multiple loans on the same luxury cars by manipulating their registration numbers. Kanchan, Dilip’s sister and CEO of the Company, and Nihal, senior sales executive of the company, were booked on 28th January 2021.

In separate bail applications filed for Kanchan and Nihal, it was pleaded by Adv. Amit Dubey, counsel representing the applicants, that the accused had no direct connection with the alleged offence and were not aware of the intentions of Dilip Chhabria. Further, it was said that the material investigation against the accused persons has been completed and their names were not mentioned in the FIR. The applicants also argued that the case is targeting the whole of the Chhabria family to coarse them to settle a civil dispute with Indermal Ramani and Kiran Kumar who initially field a frivolous FIR against Dilip Chhabria which led to his arrest. The counsel further stated that now the whole Chabriya family has false charges slapped on them.

Applicant's counsel appealed to the court that Sections 409 (criminal breach of trust) and 420 (cheating) of the Indian Penal Code was not made out against the applicants in the case as the Vanity Van was already 90% complete and Kapil Sharma has already inspected it. To establish cheating the main ingredient for cheating that is the intention to cheat should be present from the very beginning. Further, it was argued that Kapil Sharma never came forward to finalise the deal and when Dilip was arrested he has filed the FIR to get a quick settlement in the issue already pending before the NCLT.

The investigating officer and the Additional Public Prosecutor contested the application stating that the investigation against the applicants is still underway. They argued that considering the serious nature of the crime and the chance of the accused absconding and tampering with evidence bail should not be granted.

The court held that the investigation against both persons seemed have been completed and there is nothing so far mentioned in the case diary that points to the common intention of the applicants and the main accused. Also, their names are not mentioned in the FIR. The sum of Rs. 40 lakhs were wholly transferred to the account of Dilip so the role of the accused in the crime is not established. In the case of Kanchan her old age was also considered by the court.

In the bail order, strict conditions are placed on the applicants. The applicants are to submit a personal bond of Rs. 25000 and one surety of the same value for each and are to report to the investigating agency once in a week for one month.