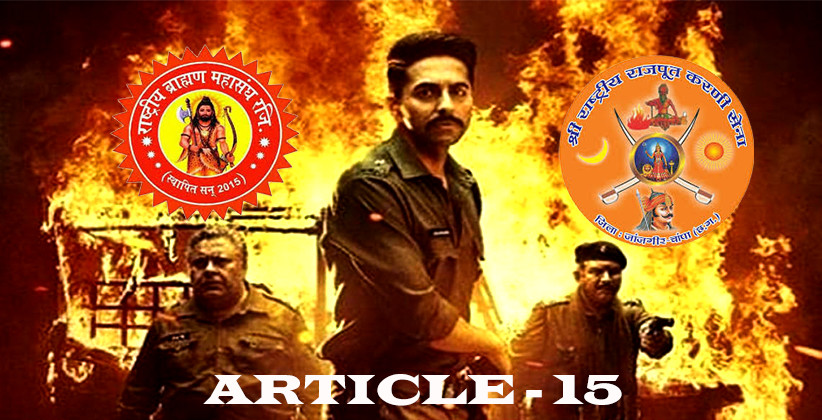 Karni Sena and International Brahmin Mahasangh on June 24, 2019, opposed the release of Ayushmann Khurrana starrer Article 15, claiming that the film shows Brahmins in a bad light.

Both the religious outfits carried out a protest in Mumbai opposing the release of the film that is scheduled to hit the screens on June 28, 2019.

Pandit Pankaj Joshi of International Brahmin Mahasangh told indianexpress.com, “The trailer of the film clearly states that it is based on true events, and since it looks like the Badaun rape case, Brahmins had nothing to do with it. Neither the rapists nor the victims were from this community. They were Yadavs and they do not even remotely belong to the Brahmin community. These are from OBC, so why use the name in the first place.”

“We even sent an official letter to director Anubhav Sinha’s registered address about fifteen days ago, but he did not respond,” he added.

Jivan Singh Solanki of Karni Sena said, “We stand by every community. We are here to ensure that no community is hurt. This time, the Brahmins need us, so we will help them. When the actual case didn’t involve Brahmins, why does the film need to do that? The film is only trying to tarnish the Brahmin community. It shows them in a bad light, and we will make sure that they don’t get their way.”

Earlier, Karni Sena had also stalled the release of Sanjay Leela Bhansali directorial Padmaavat. They had vandalized the sets of the film, assaulted Bhansali and even burnt down the posters alleging distortion of historical facts.