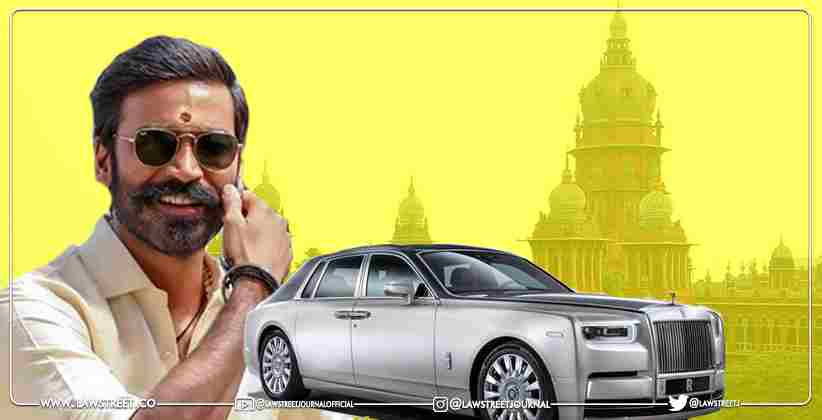 The Madras High Court on Thursday, August 05, 2021, directed actor K Dhanush to pay the balance of Rs.30.33 Lakhs out of Rs.60.66 Lakhs demanded by Commercial Taxes Department in 2015 towards entry tax for Rolls Royce Ghost imported by him from the United Kingdom within 48 hours.

Justice S.M. Subramaniam issued the direction while disposing of a writ petition filed by the actor six years ago seeking tax exemption. He had been using the car since then after complying with an interim order to pay 50% of the total entry tax demanded from him. However, now when the writ petition was listed for final hearing, just a fortnight after the judge passed a scathing order in a similar case filed by actor Vijay, Mr. Dhanush's counsel Vijayan Subramanian told the court that his client was willing to pay the tax in full and wants to withdraw the writ petition.

After recording his submission, the judge stated that it was not just the two actors but many other affluent people had been plying their imported luxury cars, on roads laid with public money, for years together by virtue of interim orders passed by the court to make just part payment of entry tax.

Consequently, the State ends up suffering huge revenue loss for considerable number of years, the Judge remarked. Justice Subramaniam also observed that litigants must pay their taxes dutifully and avoid the practice of filing cases seeking exemption and then suddenly agree to pay the money after many years.

Such practice leads to the court being overburdened with cases and not being able to concentrate on genuine litigation, he observed. The judge also said that Mr. Dhanush was guilty of suppression of facts since he had not mentioned his profession in the affidavit filed in 2015.

The affidavit barely stated that the petitioner had purchased the luxury car for Rs.2.15 Crores and paid a whopping Rs.2.69 crores towards customs duty and hence, there was no need to pay entry tax too to the State government. However, the affidavit did not disclose that he was an actor. The judge pointed out that the writ rules of the High Court had always required the litigants to disclose basic details such as their name, age and profession. He directed the High Court Registry to initiate disciplinary action against court staff who entertain affidavits bereft of such details.