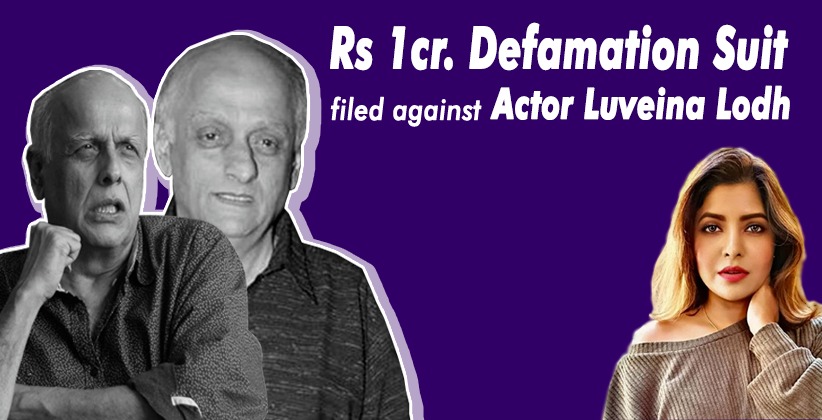 Bollywood filmmaker Mahesh Bhatt and his Mukesh Bhatt have filed a defamation suit against actor LuveinaLodh for claiming that they are harassing her and are aware of Lodh’s husband’s drug and human trafficking business.

This defamation suit was filed on Monday (26th October 2020) in the Bombay High Court against an aspiring actor LuvienaLodh for making defamatory, slanderous, and false allegations against them.

Damages of Rs 1 crore from Lodh have been sought for and also an order restraining her from making any such false claims in the future as well.

An urgent hearing was taken up by the Bombay High Court in this matter. This case was heard by a single bench consisting of Justice A K Menon. Lodh was directed to file a reply and posted it for hearing after three weeks. The court was assured by Lodh’s advocate that she would not publish or make any such statement against the Bhatts in the future.

Last week, Lodh had posted a video on social media stating that she was married to Sumit Sabharwal, who is allegedly Mahesh Bhatt’s nephew. In the video, Lodh alleged that Sabharwal was in the business of supplying drugs and also human trafficking.

It was alleged by Lodh that Mahesh Bhatt was aware of the drug and human trafficking business. After the video was posted on social media, Mahesh Bhatt, through his counsel Ameet Naik, sent a legal notice to Lodh asking her to stop making such false statements.

Later, the Bhatts filed a defamation suit in the Bombay High Court seeking Lodh to be restrained from making, publishing, and circulating any defamatory and slanderous comments against them.

The defamation suit stated that “The suit is also seeking damages to the tune of Rs one crore from the respondent (Lodh) for making various grossly defamatory, slanderous, distasteful and false allegations and statements against the applicants (Bhatts).” The suit also asked Lodh to delete the video and also claimed that Sabharwal who was the husband of Lodh was not directly related to the Bhatts and that he was “the son of the applicants’ sister’s husband’s brother.

The suit further said that false allegations against Mahesh and Mukesh Bhatt were made by Lodh with malicious intentions to obtain the best settlement in her divorce proceedings with her estranged husband as the Bhatts were a famous name in the industry.