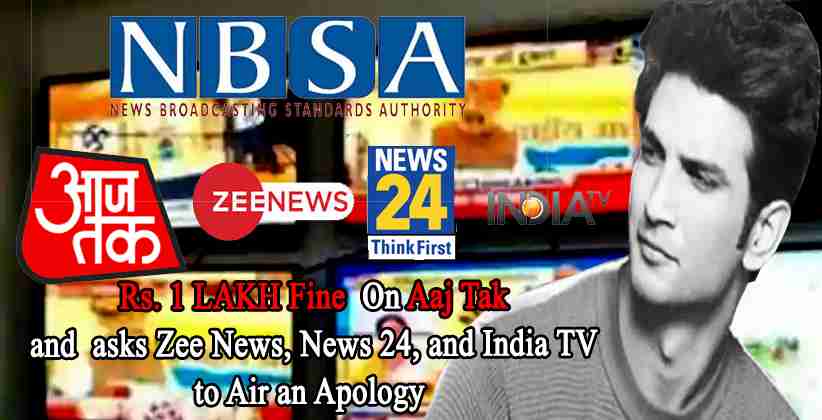 NBSA is a self-governing authority and has criticized the said news channels for running insensitive Tag lines that were violating the privacy and affecting the dignity of the deceased. And some of the channels, like India TV and Aaj Tak, have even been held responsible for showing the pictures of late actor’s corpse on their channels. It was stated,

“While it is the duty of the news channel to report news, which is for the public interest and the persons being reported via news channel may get justice from such media reports but at the same time, it is equally important to present the news in a manner which doesn’t violate the privacy of the dead person and neither sensationalize the tragic occurrence. It is important that the deceased person must not be subjected to unnecessary media glare.”

There were many derogatory tag lines used by the media channels, one of them was by Aaj Tak’ infamous “Hit Wicket” tagline where the authority stated, “It appears that the questions are being addressed to Sushant Singh Rajput, who is no more, therefore, the Taglines are offensive, violate privacy and even affect the dignity of the dead.”

Another belligerent tagline used by the Zee News, “Patna ka Sushant, Mumbai mei fail Kyu?” the authority specified, “the Tagline… tends to give the impression that committing suicide is a failure and therefore the Tagline is very inappropriate and violates the privacy and dignity of the deceased. There might be reasons for suicide but the impression created by the News channel that a boy from a small town committed suicide in a metro city is labeled as his “failure”.”

The authority also condemned the taglines used by the News 24 stating that Sushant had forgotten the anti-suicide message given by him in his own movie Chhichore and referred to these lines as derogatory and offensive towards the deceased person.

The authority further noted, “Undoubtedly, the media has the right of freedom of speech and expression. It also cannot be doubted that when a well-known public personality like Sushant Singh Rajput commits suicide, not only it becomes big news, but also a matter of discussion predicting the reasons which revolve with various complaints and hypothesis. Therefore, telecast of such programs per se can neither be discouraged nor criticized. The freedom of speech and expression not only includes the right to express, publish, and propagate information through circulation but also to receive information. By broadcasting information, the media is facilitating the citizenry to avail its right.”

NBSA further added, “if the program carried by Aaj Tak, Zee News and News 24 would be without the Taglines, it may not have violated the guidelines relating to privacy, sensationalization, and dignity of the deceased person. However, since the programs carried out with the specific Taglines by the said news channel have violated the Specific Guidelines Covering Reportage as per the Authority.” Inter alia, the authority has directed Aaj Tak and India TV to apologize for circulating images of Rajput’s corpse all over the channel.  Allegedly, the channel Aaj Tak even broadcasted the photographs of the Late actor’s corpse got from his bedroom and it explicitly described the entire method which probably might have been used by the late actor to hang himself including the color of the cloth also used for hanging himself. Even India TV is accused of repeatedly showcasing the detail of the color of the lips of the corpse and the marks on the neck of the corpse. It also showed the picture of the body covered in a cloth being carried out of the apartment continuously.  Thus, the authority stated that this was a clear violation of the NBSA Guidelines as mentioned below-  It has to be noted that Authority did leave News Nation for showing the deceased corpse in their telecast, just in view of remorse and assurance of the news channel that the same would not be repeated. Even the ABP Mahja channel was let off by the authority by giving them a warning and the authority stated that they didn’t project the close-up images of the body and thus were given just a warning.  The new channel Aaj Tak has been directed to pay a fine of Rs 1 lakh for its failure to conduct due diligence before broadcasting these tweets and ascribing them to the actor. It was alleged that Aaj Tak had falsely reported on the fake tweets that Rajput posted three tweets which he later deleted just before some hours of his death on June 14, 2020. However, the channel later deleted those tweets later and took down the article.  The authority was serious over this issue and stated, “the broadcaster should have conducted due diligence and verification before telecasting the tweets and not subsequently, which due diligence is a basic tenet and requirement of journalistic ethics and telecasting the tweets without the verification had the tendency of spreading misinformation among the people. NBSA found that the broadcaster had violated the Specific Guidelines Covering Reportage relating to the accuracy of the news said, The authority has further held Aaj Tak guilty for violating its Guidelines on Privacy as much as the reporters were barging into Rajput’s parents’ house also post the death of the actor and even tried to question various family members of the late actor who were still in shock and grieving state of mind. Similarly, even the ABP News rushed to interview the Rajput’s cousin sister but the news channel was kept off the hook as the authority noted that the cousin had voluntarily agreed to give the interview regarding the demise of the actor.    [READ ORDER]